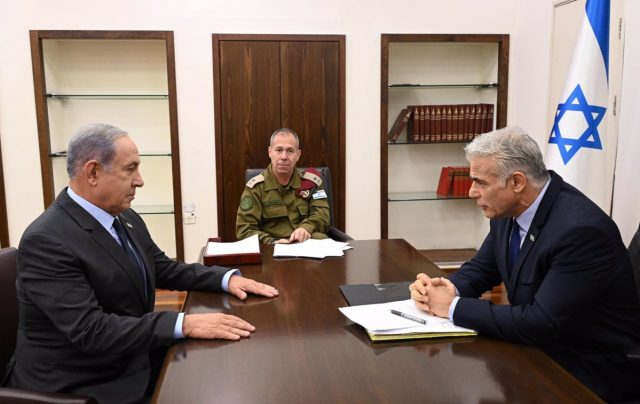 The Israeli Prime Minister, Yair Lapid, has called on Monday on the people of Gaza to aspire to “another way” and has proposed “work” and “dignity” if they choose to live in peace with Israel. More than 40 Palestinians were killed between Friday and Sunday in the Israeli offensive on Gaza.

“Throughout the operation, efforts have been made to avoid causing harm to those who were not involved. The State of Israel is not going to apologize for protecting its citizens by using force, but the death of innocents, particularly children, breaks your heart,” Lapid said in his first official speech following the cease-fire that came into effect on Sunday night.

“I want to address the residents of Gaza and tell them that there is another way. We know how to protect ourselves from anyone who threatens us, but we also know how to give work, a life with dignity to anyone who wants to live in peace next to us,” he said, according to the Israeli daily ‘The Times of Israel’.

Thus, he referred to the peace agreements signed with Arab countries and other cooperation projects. “The choice is yours. Your future depends on you,” he said.

In addition, Lapid has thanked opposition leader Benjamin Netanyahu of the Likud party for supporting the government in the military offensive against Islamic Jihad in the Gaza Strip. “Netanyahu has shown responsibility and supported the government during this operation,” he said.

Following the ceasefire, Netanyahu has stressed that the military offensive “would not have been possible” if the Islamist Raam party remained in the governing coalition. “Only a stable government that does not depend on Raam and the Joint (Arab-Israeli) List can fight terrorism,” he has argued. Raam supported the broad coalition that brought Naftali Bennett and Lapid to power, but the Joint List has never supported the government.

Read:  The Westminster court sets the hearing to authorize the extradition of Assange to the US for April 20

The poll released Monday by Channel 12 reveals that 68 percent of Israelis believe they have won the conflict, although this support has not translated into improved electoral prospects.

Netanyahu’s Likud remains in the lead and would win 34 seats, compared to 24 seats for Yesh Atid, the centrist party led by Lapid. The Blue and White formation of Defense Minister Benny Gantz would win 12 seats and Religious Zionism, 10.

The ultra-Orthodox Shash party would win eight seats and United Torah Judaism, 7. The Joint List would take 6 seats, Raam 5, Yisrael Beitenu 5 and the left-wing Meretz party would be left with 4 seats.

With this arithmetic, the Knesset or Israeli Parliament would remain in a technical tie with 59 seats favorable to Netanyahu and 55 to the current coalition. The Joint List would remain on the sidelines with 6 seats.