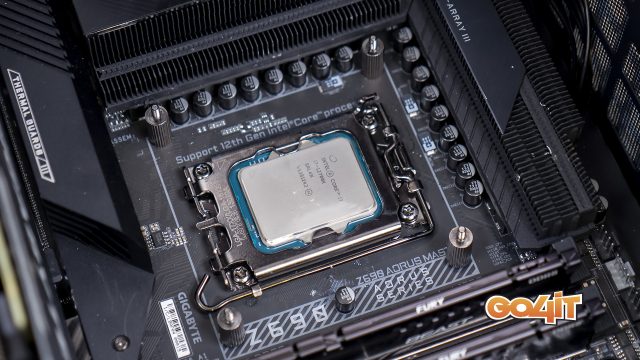 After ten years of stagnation in the field of desktop processors, Intel has finally managed to bring innovation in this area. The 12th-generation Core processors, codenamed Alder Lake-S, are by far the coolest idea in the industry in recent years, with Intel finally adopting a design that mobile processors have long used. .LITTLE, or the combination of high performance cores with efficient ones. This move also comes with the miniaturization of the manufacturing process at 10nm, and the Intel Core i7 could be the most balanced model in the series, offering 12 cores with 20 threads and frequencies up to 5 GHz.

Alder Lake-S, the desktop version of Intel’s new architecture, comes with several releases for the desktop PC processor market. First of all, as I mentioned before, it comes with two types of cores integrated in a single chip. On the one hand we have high-performance cores (P-Cores), which will be used for more complex tasks, which come with frequencies above 5 GHz in boost (on i9), and efficient cores (E-Cores), which should take on less important tasks in the background.

In reality, however, applications that know how to use multiple cores can use them all at once. However, it is important that applications are updated with support for new processors, in order to be able to identify high-performance and efficient cores, to give them the right tasks for their performance. Windows 11 helps with this, as it is the first operating system with a scheduler built specifically for this architecture. In fact, that scheduler was also the reason why AMD processors had problems in the first weeks after the launch of the operating system. However, when we talk about performance cores and efficient cores, we must mention that the “efficient” ones are not exactly “lazy” either. If you still have a Skylake or Kaby Lake processor in your computer, the efficient cores in Alder Lake are about as powerful as those in those processors.

In addition to this new design, we are dealing for the first time on the desktop with an integrated GPU based on the Xe architecture: Intel UHD770. Most likely, those who will choose this processor will not use this GPU, but it is good that it exists, especially if you build a new PC and do not find a dedicated GPU in stock. Last but not least, Intel is supporting new technologies on the Alder Lake platform. These are the first processors on the market to support DDR5 memory and the new PCI-Express 5.0 standard, which will be used in the future for new generations of video cards and new high-speed SSDs. Currently, these components make the most of Generation 4.0. And to complete the package and probably hit another nail in the coffin of HEDT platforms, Alder Lake processors can use up to 128 GB of dual-channel RAM, which should be enough for even “consumer” hardware. in cases of use in the professional area. For more RAM and quad-channel, Intel believes it should switch to specialized hardware, such as Xeon processors.

However, Alder Lake also causes some confusion among the operating frequencies of the processor. There is now a base frequency for the performance cores and one for the efficient ones, as well as different boost frequencies for each one. Moreover, there is a Max Boost, which is made only on high-performance cores.

Read:  Oppo Reno7 Z 5G and the top of the range Find X5 Pro, officially launched for the European market With the Alder Lake debuts the Z690 chipset, which allows all the improvements mentioned above, but also a new slot, significantly different: LGA 1700. This is the first time that Intel changes the shape of the slot, from a square to a rectangular , elongated. That’s because the new extra cores need extra space. Being still an LGA (Land Grid Array) slot, the pins are also on the motherboard, the processor having only contacts on its surface. This is an advantage for Intel, as AMD processors are a bit more fragile and prone to pin crashes. However, on Intel platforms, you need to pay a little more attention to motherboards when installing a processor.

We are testing the Intel Core i7-12700K processor, the top model of the i7 series. In addition, there are 4 other models, all with the same configuration of 12 physical cores, 8 performance and 4 efficient, but with different frequencies, different power consumption, and some come from the factory without integrated GPU (F variants). All cores also receive Hyper-Threading, so in total we have 20 threads (16P and 8E). To these is added 25 MB of L3 Cache memory. The Intel Core i7-12700K comes with a base frequency of 3.6 GHz for the P cores and 2.7 GHz for the E cores, with Turbo Boost 2.0 up to 4.9 GHz on the performance cores and 3.8 GHz on the others. Turbo Max 3.0, the strongest boost, but the shortest, can reach 5.0 GHz. The declared consumption for Intel Core i7-12700K is 125W, but in full load I saw it exceeded even 230W. This is important when setting up your PC. Depending on which GPU you choose, a 650 or 700W source may not be enough for a 12th generation Intel processor. The same goes for cooling. Don’t rely on very cheap coolers (the processor doesn’t include one in the package). For such a processor, a top-of-the-range Noctua model or an AIO system would be the most efficient solutions.

I also found an interesting option for Alder Lake processors in the motherboard BIOS. There is a “Legacy” mode to better run software or games that are incompatible with P + E core architecture. You can enable this mode by simply pressing the Scroll Lock button in Windows, which disables efficient kernels. Pressing the button again activates them. It’s a sleek solution to a problem that we’re sure we’ll encounter in older applications or games that haven’t received a new hardware support update yet, or will never receive again. The processor has been cooled with an AIO cooler, the AORUS WATERFORCE X 240 model, a cooler model with LCD display, which can display in real time the frequency or temperature of the processor, or custom logos and animations. This AIO is enough for those who don’t want to overclock the processor, but it won’t be enough to support extreme frequencies on the 12th generation of high-end Intel processors. In our tests, the processor could not support frequencies higher than 4.5 GHz in long-term boost, reaching maximum frequencies of 100 degrees Celsius, which automatically applies a throttle. However, not all cores have warmed up as much. There are some performance cores that reach 100 degrees while others are around 90. In the case of efficient cores, the maximum temperatures have reached 86 degrees, below the thermal limit for throttling. Thus, the test results are not with the system in 100% ideal conditions, requiring a more efficient cooling system to reach its maximum potential.

Intel Core i7-12700K is one of the best processors I’ve tested so far. It, even with an insufficient cooling system to maintain its high frequencies, manages to achieve very high scores in the performance tests we used: CineBench, GeekBench, WinRar and AIDA64.

It also helped that I used the processor with DDR5 memory, although it is still compatible with DDR4 memory. Those who want to invest as little as possible for an upgrade to Intel 12th genre can choose Z690 motherboards with DDR4, to which to add the memories they already have. Of course, in applications that are dependent on RAM, the results will be clearly poorer. The Alder Lake platform can only reach its full potential with next-generation RAM. Intel Core i7-12700K is the perfect processor for “gamers” who want top performance, but who want to have little room for productivity, such as video editing or other use cases where a fast processor with many cores is needed. Intel also offers stronger (and more demanding in terms of consumption and temperatures) through the i9 line of models, with even more cores, but also a significantly higher price, but also cheaper alternatives, which are suitable in especially for gaming, in the form of Intel Core i5. i7, once the top of the range, thus becomes the model in the upper middle range. But the best thing about the Alder Lake series, in addition to the large number of cores and new technologies it supports, is this shift to a new type of design, which will certainly be adopted, even if not immediately by AMD. . Using different cores for different tasks is a very good idea, which proves to be a success. Of course, AMD still has the advantage of miniaturization. While Intel is just now releasing its first 10nm processors, AMD already has 7nm processors on the market, and these benefits are seen in consumption and temperatures.

Core i7, and Alder Lake in general, are high-performance processors, but they are also high power consumers and high heat generators. However, the fact that Intel has room to “shrink” in size for the future gives us hope that in the next few years, its processors will be more efficient and cooler.

The tested product was provided by ASBIS Romania, an authorized distributor of Intel products.