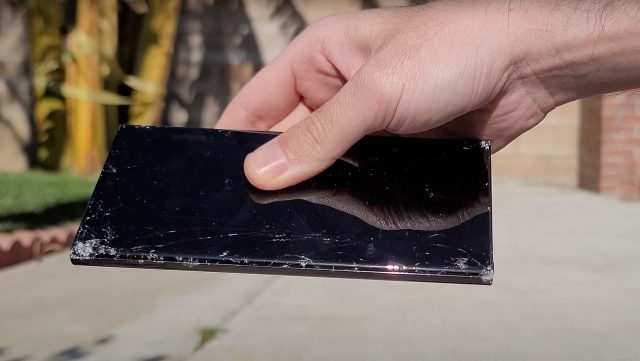 Galaxy S22 Ultra, the rightful successor to the Galaxy Note series, is a large and heavy phone with a curved screen, glass back and cameras with very exposed lenses. What could go wrong if you drop the new Samsung flagship directly on cement?

Unlike the Galaxy S22 and S22 + alternatives, the Ultra comes in a noticeably heavier case, with no rounded edges that could more effectively redistribute the received shocks and a curved screen, which excludes the possibility that the blows received from the side can be taken by metal frame arranged on the contour of the housing. Praised and criticized equally for the minimalist look, but it seems too simple, the design that eliminates the camera ornament turns out to be totally uninspired in the end. Fully exposed, the camera lenses are the first to fail if you drop your phone on the floor, followed by the glass cover.

Another drawback is the way Samsung has chosen to maximize the space available for internal components, almost completely flattening the top and bottom of the phone. In addition to the fact that the frame “cut” at a right angle makes it somewhat awkward to handle the phone, the anodized painted finish gets ugly scratches and does not offer much protection for the glass cover, which will chip very easily.

Already a nightmare for users who have owned high-end phones in the past, the curved-edged screen can break from the first “face-down” drop, the PBKreviews YouTube experiment shows that slipping your phone out of your pants pocket can also it had extremely costly consequences.

In the end, the main conclusion is that using a Galaxy S22 Ultra phone without the protection of a very good quality case is totally contraindicated, any small “incident” can lead to substantial repairs that are not covered by the standard warranty.