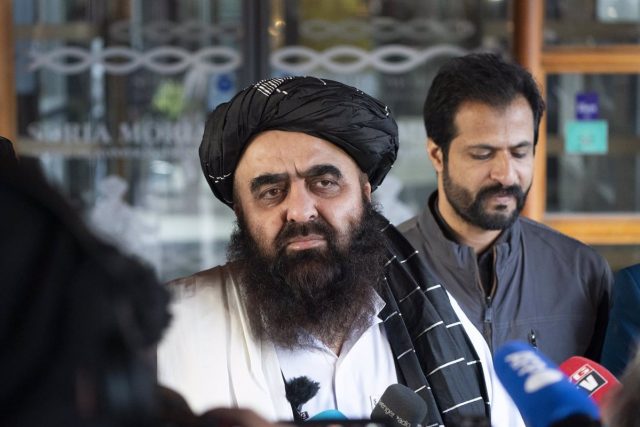 A delegation from the Taliban movement led by its acting foreign minister, Amir Jan Muttaqi, met this Wednesday with representatives of the European Union and the Persian Gulf countries in Doha, the capital of Qatar.

Thus, between the meetings it has held, the delegation has asked the European representatives this Wednesday to “relaunch the suspended educational process and to cooperate in the field of Internet services so that Afghan students have access to online courses”, as reported by the Taliban Foreign Ministry in a statement.

On the other hand, the delegation discussed “the humanitarian situation in Afghanistan, higher education, development” with senior Qatari officials, as well as “humanitarian aid and the granting of scholarships to Afghan students,” according to a statement.

Regarding the talks that the delegation has held this week with representatives of the Gulf Cooperation Council, a meeting described as “positive” by both parties, the delegation has asked the international community “to extend development assistance, in addition to of humanitarian assistance, to positively alter the country’s economic situation,” according to a statement.

RESPONSE OF THE EUROPEAN PARTY

“We underline Afghanistan’s obligations in terms of Human Rights, the fight against terrorism, humanitarian assistance and express our deep concern about the recent arbitrary arrests and intimidation,” the European Union’s ambassador to Afghanistan, Andreas von Brandt.

Thus, he stressed that the delegation has committed to “opening school and university education for students”, both for girls and boys, as well as to “respect the Constitution and current laws and only adapt the constitution in a process consultative with all strata of society.

In addition, the EU ambassador to Afghanistan has also reported that the delegation will be responsible for “implementing women’s rights, including the right to inheritance.”

For his part, the special envoy of the European Union for Afghanistan, Tomas Niklasson, has indicated on his official Twitter profile that the European side is concerned “about forced disappearances and illegal detentions, and about the mistreatment of women by of the Police during the peaceful demonstrations”.

“The EU re-emphasized the importance of unhindered access for humanitarian aid through NGOs and UN partners and respect for International Humanitarian Law,” he said, adding that in Afghanistan there is “a lack of political representation and a systematic denial of the rights of women and minorities”.

“The EU remains committed to the Afghan people and is delivering €500 million in assistance through the UN and NGOs focusing on food, health, protection, education and livelihoods. The two delegations agreed to continue the dialogue through physical and virtual meetings”, he pointed out.

The delegation’s trip takes place after the president of the United States, Joe Biden, unfroze some 3,500 million dollars (about 3,000 million euros) in paralyzed assets of the Central Bank to facilitate humanitarian aid to the Central Asian country.

Biden’s executive order implies that the United States first assumes partial “protection”, as described in the White House note, of the approximately 7,000 million dollars (6,100 million euros) of paralyzed assets of the Central Bank in the United States.

Of these, 3,500 million will go to humanitarian aid and the other half to a fund for the ongoing litigation of victims of terrorism in the United States, in particular the attacks of September 11, 2001.

Regarding this humanitarian aid, the Taliban Foreign Ministry has specified this Wednesday on its official Twitter profile that “it is completely unacceptable” that the money is in the name of humanitarian aid.

“The Chargé d’Affaires of the United States Embassy, ​​John Johnson, explained that President Biden’s speech on the distribution of the money had been misinterpreted in the media and that a mechanism was being worked on that would probably provide part of the money to the Central Bank. of Afghanistan for their support,” he said.

In fact, the Central Bank of Afghanistan has already recalled that these funds are necessary “to implement monetary policy, facilitate international trade and stabilize the financial sector” and that “the real owners of these reserves are the citizens of Afghanistan.”