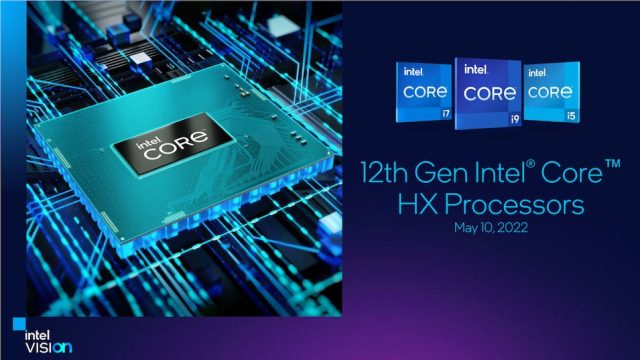 Intel announced this week a new series of 12th Core laptop processors, Alder Lake. These are part of the HX range, the most advanced models in mobile format, being intended exclusively for large laptops, with large and efficient cooling systems, but also with a very high power consumption. They can reach desktop consumption, include up to 16 cores, and reach frequencies up to 5 GHz. Basically, the hardware of these processors is extremely similar to that of the Alder Lake desktop models, launched last fall.

Unlike other series of 12th generation processors, the HX models come in only three variants: Intel Core i9 for the highest performance area, Core i7, for high-end performance and Core i5, for balanced systems, with enough performance at board, but not extremely expensive. Being Alder Lake models, they benefit from an internal architecture based on two types of cores. Performance cores (P-Cores) and efficient cores (E-cores). However, the number of cores, their frequency and the amount of cache make the difference between i5, i7 and i9 in the HX family of processors. Some also allow overclocking, while some have this limited capability. All have a basic TDP of 55W, but can reach 157W in boost. Also, the top models in each line are compatible with ECC memory and vPro security, for use in professional environments. The new processors promise up to 111% improved performance over the previous generation of Intel HX processors, depending on the type of application running. However, they are not made for gaming, although most likely, they could be the best for such activities on the market.

However, Intel Core 12th Gen is recommended for professional devices in areas such as research, finance, video editing or product development.