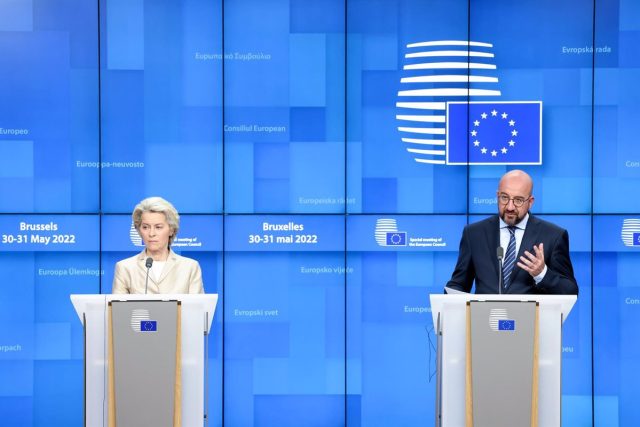 The European Union has formally adopted this Friday sanctions against 65 individuals and 18 entities involved in the Russian invasion of Ukraine, including several people considered to be from the narrowest circle of Vladimir Putin, such as the former gymnast Alina Kabaeva, whom many point to as a lover of the president. , and numerous senior Russian and Belarusian military commanders.

Within the framework of the sixth package of restrictive measures, which includes the embargo on Russian oil with exceptions for five Member States, the Twenty-seven have included Kabaeva, Olympic champion in Athens 2004 and member of the Duma, on their ‘black list’, alleging her “close ties” with Putin.

This measure, together with the sanctions against relatives of politicians such as the wife and children of the presidential spokesman, Dimitri Peskov, and against more oligarchs seek to tighten the siege on individuals already sanctioned so that there are no attempts to bypass the measures, European sources have explained.

Read:  Ukraine denounces the death of eight people in new attacks by the Russian Army against Kharkov

This round does not include Patriarch Kirill as requested by Hungary, which blocked the approval of the package so that his name would be removed from the list of sanctions despite the agreement reached by the EU leaders at the summit on Monday. Finally, on Thursday the member states accepted this concession to unblock the sixth package that imposes a partial embargo on Russian oil, also at the request of Hungary and four other countries that will be exempt from the veto.

The list of those sanctioned responds to the evolution of the war in Ukraine, which will affect 45 senior officials of the Russian Armed Forces, many responsible for attacks on Ukrainian territory, the case of Colonel Azatbek Omurbekov, called ‘the butcher of Bucha’ or the General Mikhail Mizintsev, responsible for the offensive against Mariupol. Ukrainian collaborators are also punished in cities such as Kherson, taken by Russian troops in the early stages of the war, and Belarusian commanders for their participation in the Russian invasion of Ukraine, allowing Russian troops to operate from their territory.

Among the 18 Russian entities sanctioned are above all entities from the Defense sector that are key to providing cover for the Russian Army in its military offensive against the neighboring country.

In total terms, the EU has applied sanctions against 1,158 people and 98 Russian entities since the annexation of Crimea in 2014 and is by far the most extensive sanctions regime put in place by the European bloc. People on the list are subject to an asset freeze, and EU citizens and companies are prohibited from making funds available to them, as well as being banned from entering or transiting EU territories.

Likewise, the EU has adopted sanctions against Belarus due to the internal situation in the country. In this case, it is also the sixth round that it adopts against the Alexander Lukashenko regime since the fraudulent elections of 2020 and affects 12 people and 8 entities.

The bloc will punish senior officials, businessmen and relatives, as well as judges for the repression against civil society and the democratic opposition in Minsk. Among the entities, the public broadcaster Belteleradio stands out for disseminating propaganda of the regime and firing media workers under its control who had participated in democratic protests.