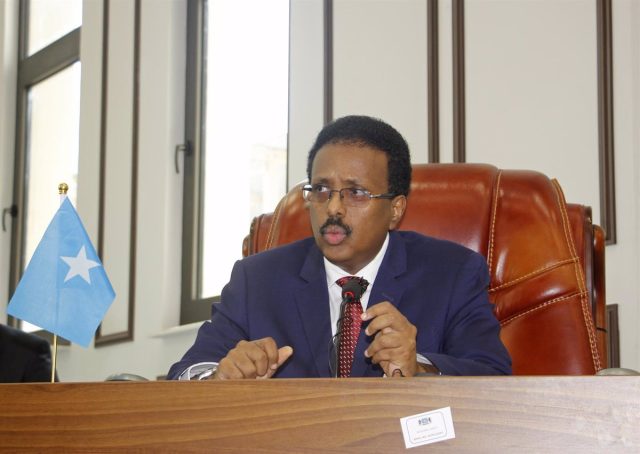 The Somali Parliament will hold presidential elections this Sunday that arrive more than a year late after problems in carrying out the parliamentary elections scheduled for December 2020 due to political tensions and growing insecurity due to attacks by the terrorist group Al Shabaab.

A total of 39 people, a historical figure in the country, have presented their candidacy for the Presidency, ahead of a vote that will be held in a facility at the Mogadishu international airport in the midst of a large security device.

The Somali political system does not contemplate direct voting, so the president will be elected by the members of the recently constituted Parliament after an indirect process in which the population does not have the right to vote and in which political parties do not participate either.

Thus, parliamentarians are elected through delegates appointed by leaders of traditional clans and members of civil society selected in turn by regional authorities. Subsequently, these people and the members of the Senate, who represent the five regions of the country, are in charge of appointing the new president.

This model reflects the power that the clans still have in the African country — four of which retain the majority, with seats equally distributed — and the absence of a State with the capacity to control the situation on the ground, in the midst of insecurity and widespread corruption.

The parliamentary elections concluded in April after numerous delays since the end of 2020, after which the leaders of both chambers were elected, which will be headed by Adán Mohamed Nuur Madobe –president of the Lower House– and Abdi Hashi –president of the Upper House–.

The selection process for the executive positions of the legislative body also led to a historic milestone, after Sania Yasin Samatar became the first woman to be vice-president of any chamber of the Somali Parliament at the end of April.

The vote will also be held some 15 months after the end of the term of the current president, Mohamed Abdulahi Mohamed, and amid criticism from the opposition for his alleged efforts to lengthen the electoral process and remain in power unconstitutionally.

Since then, the president, popularly known as ‘Farmajo’, has been involved in numerous clashes with the prime minister, Mohamed Hussein Roble, whom he has even tried to suspend from his duties on two occasions due to his tensions and his different interpretations of the legal framework for taking of decisions.

Read:  Salvini, on the future Italian government: "Spending days talking about leadership is a waste of time".

‘Farmajo’ recently announced that he would try to be re-elected –after his victory in the 2017 elections–, although he does not appear to be among the main favorites after the setbacks suffered by his candidates in the voting for the main positions within the Parliament.

Thus, among the main favorites for the position are former presidents Sheikh Sharif Ahmed (2009-2012) and Hasan Sheikh Mohamud (2012-2017), who have been especially critical of the current president in recent months, tensions that have come even to threaten the outbreak of armed confrontations in the capital.

Sharif Ahmed, a member of the Hawiye clan, has focused his political program on completing the process of revising the Constitution and ending the conflict with Al Shabaab –which maintains ties with the terrorist organization Al Qaeda–, while Sheikh Mohamud , also from the hawiye clan, is committed to resolving the tensions between the central government and the regions.

In addition, among the candidates with the most possibilities are former Prime Minister Hasán Ali Jaire, who held the post between 2017 and 2020 – when he had to resign after a controversial confidence vote -, and the president of the semi-autonomous region of Puntland, Said Abdullahi Deni.

Ali Jaire, also a member of the Hawiye clan, has defended that his objective will be to maintain the political agenda that he promoted as prime minister, modifying the errors that led to the motion of censure against him, while Deni, a member of the Darod clan -who belongs to ‘Farmajo’– has focused on strengthening the economy and institutions.

On the other hand, among the 39 candidates there is only one woman, former Foreign Minister Fauzia Yusuf Adam, although she is not among the favorites. The role of women in Somali politics remains residual, although progress has been made in recent years in terms of their representation in Parliament.

In this sense, Yusuf Adam has defended during his electoral campaign the need to integrate women into the political process and give them more weight in society in order to make the African country move forward and has supported his ability to promote a reform given his experience as minister and deputy prime minister.

The presidential elections have also led to a rise in tensions in recent weeks, which has been reflected in an increase in the prices of Kalashnikov assault rifles in the arms markets, according to what The New Humanitarian agency reported this week. .

Already in April 2021, “Farmajo’s” attempts to extend his mandate through a vote in Parliament led to clashes in Mogadishu, a precedent that raises fears that the vote could lead to new episodes of violence in Mogadishu, the main stronghold of the Hawiye clan.

The election will also take place in the midst of a situation of insecurity marked for years by the presence of Al Shabaab, which controls parts of the south of the country and which has carried out several attacks in the days leading up to the vote, both in the capital and in other parts of Somalia.

The group’s latest attacks include one in April against a facility near Mogadishu airport during the swearing-in ceremony for new parliamentarians, an incident that resulted in no casualties. The capital has been the scene of several attacks in recent days, including an assassination attempt on the local police chief, Farhan Qarole, who already survived a car bomb attack in July 2021.

Al Shabaab also carried out an attack in early May against a base of the African Union (AU) mission in the Somali town of El Baraf, located in the center of the country, which resulted in the death of at least ten Burundian soldiers. integrated into the African Union Transition Mission in Somalia (ATMIS), according to the balance provided by Gitega.

This base has also been attacked with projectiles in recent days, in a sign of growing insecurity despite international efforts. ATMIS received the support of the United Nations Security Council in April and arises from the restructuring of the AU Mission in Somalia (AMISOM), which supports the Government in the fight against Al Shabaab.

Added to this is the deepening of the humanitarian crisis in the country, also shaken by the worst drought in nearly four decades, which led Roble to request international aid in March. Thus, the prime minister, who declared a state of emergency at the end of 2021, warned that nearly seven million people have been affected.

The UN has unveiled a Humanitarian Response Plan for Somalia that seeks to raise 1,500 million dollars (about 1,320 million euros) to help 5.5 million people, in the midst of a displacement crisis due to the loss of refugee camps. cultivation that has also led to inter-community tensions.