Ethereum is currently trading above $1,700 after gaining more than 15 percent on Thursday as the network prepares for the merge.

Ether gained 6.3 percent Thursday afternoon to $1,720.89. ETH hit an all-time high of around $4,800 last November, but has started the new year in a less than encouraging manner. Amidst the recent general decline in broader digital assets, Ether has managed to gain 57% over the past two weeks. In addition, as of last Thursday, the cryptocurrency had gained 15% over the past 24 hours and 44% over the past month. 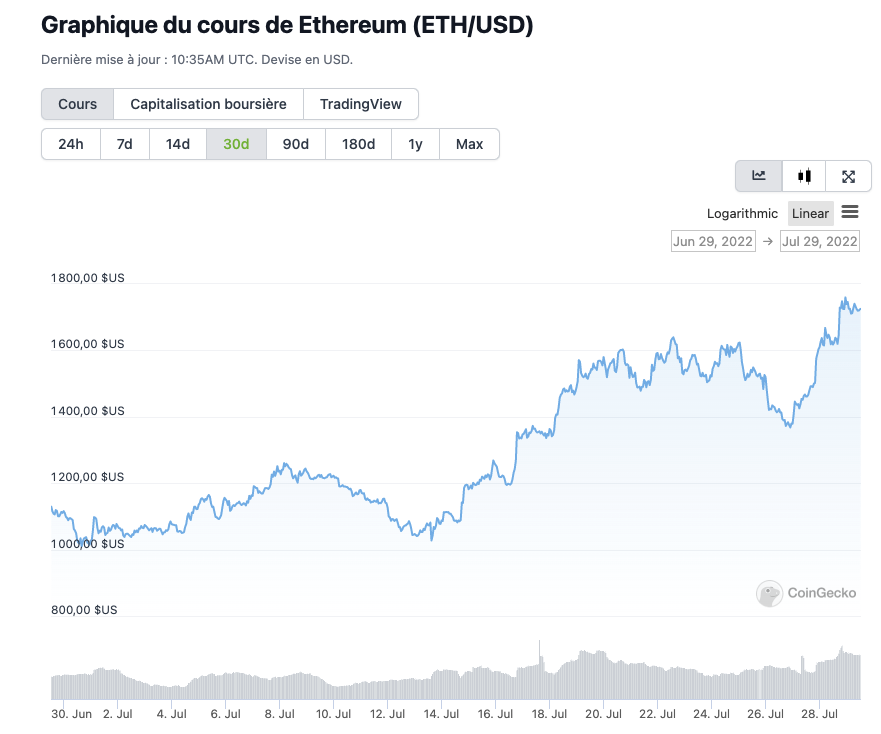 Other development factors around Ethereum’s $1,700 run

The recent rise in the price of Ethereum follows the latest interest rate hike by the US Federal Reserve. However, analysts also predict that if other macroeconomic conditions do not improve, the current rise in ETH may not last long. In addition, analysts also explain that new money needs to enter the market, such as bulls might expect, to support the price run.

Crypto-currency prices, in general, jumped 4.2% yesterday, even seeing the overall market capitalization reach $1.08 trillion at one point. For example, Bitcoin, spiked 4.3% and temporarily surpassed $24,000. However, today, BTC is changing hands at just under $24,000.

The Lido DAO token has also benefited from the recent rise in crypto asset prices. At one point, the yield staking protocol was up about 24.5%.

The latest Ethereum price move comes amidst an update on the Goerli Testnet merger plans. The network’s developers have announced that the merger will take place in early August, starting with Bellatrix, the Prater upgrade “which prepares it for the merger“. As the ad states:

“For the final testnet proof-of-stake transition, Goerli will merge with Prater. The combined Goerli/Prater network will retain the Goerli name after the merger. Bellatrix, the Prater upgrade for the merger, will occur at time 112260, scheduled for 12:24PM UTC on August 4, 2022.”

“After Bellatrix activation, the Goerli/Prater merger will take place when Goerli reaches a total difficulty of 10790000, expected between August 6 and 12, 2022“, say the developers.

Read:  Gucci goes all in on Web3: Gucci now accepts ApeCoin in select US stores

The blog post about the Goerli merger ends with:

“After Bellatrix activation, the Goerli/Prater merger will occur when Goerli reaches a total difficulty of 10790000, expected between August 6 and 12, 2022.”

Via the mergethe Ethereum Goerli test network will be able to offer some additional features. These include support for proof of stake before the main network merge, which is expected to take place in September.

Mergers like Goerli’s usually serve as final tests for the eventual mainnet merger that will take place later. For example, in early July, Ethereum developers activated the merge on the Sepolia testnet in preparation for a mainnet upgrade.