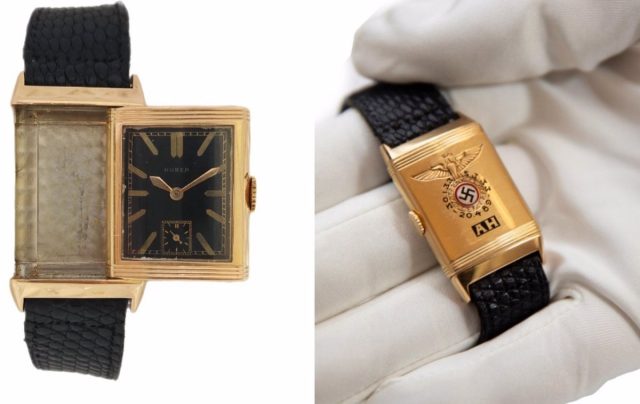 A gold wristwatch that belonged to German dictator Adolf Hitler has been auctioned for nearly 1 million pounds (1.07 million euros) despite criticism from Jewish leaders.

The watch, richly decorated with the swastika and eagle symbols of Nazi Germany, is also engraved with the initials A.H. for the dictator and was acquired by a buyer whose identity has not been disclosed.

The American auction house Alexander Historical Auctions has defended the sale and the need to preserve history. According to the auction sheet itself, the watch was given to Hitler for his birthday in 1933, the year he became German chancellor in the midst of a tumultuous political crisis.

Read:  Trudeau believes it is "absolutely correct" to describe Russian actions in Ukraine as "genocide"

The watch was taken as “spoils of war” when some thirty French military personnel seized Hitler’s retirement home at Berghof in the Bavarian mountains. It was later resold and remained in the same family for several generations.

In the same lot were sold toilet paper from the Wehrmacht or German Army, cutlery and champagne glasses belonging to Nazi leaders and objects belonging to Hitler’s partner, Eva Braun, including a dog collar from her terrier richly decorated with swastikas.

A total of 34 Jewish leaders have signed a public letter criticizing the auction, which they called “abominable.”

Read:  Israel's prime minister offers "work" and "dignity" to Gazans if they opt for peace

“This auction unwittingly or unwittingly helps those who idealize what the Nazi party stood for and offers buyers the opportunity to treat a guest or loved one to an object that belonged to a genocidal murderer or his followers,” European Jewish Association president Rabbi Menachem Margolin has said, quoted by Sky News.

“It is clear that the lessons of history must be learned, but Nazi objects should be in a museum (…) and not sold to the highest bidder using memories, suffering and pain for profit,” he added.