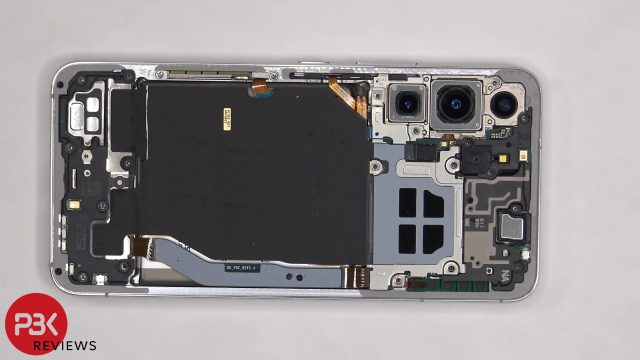 Galaxy S22 phones are already starting to be shipped, and that means we’re going to see all sorts of tests, some of which are more unusual. In the case of YouTube channels known for endurance testing and disassembly, we have the opportunity to see for the first time how well the new models are built and how easily they can be repaired in case of accidents. Galaxy S22, the basic model, does not seem to be very far from the previous one, the only real difference being the back, which is made of plastic.

PBKreviews has released the first two videos on the resistance of the Galaxy S22. The phone has been tested in all respects, including water resistance. It seems that although it is water resistant and the internal components are not affected even after more than an hour, the screen tends to turn on when in contact with water. When it comes to scratch resistance, it is equipped with the new Gorilla Glass Victus glass, which is scratch resistant up to level 8 on the Mohs scale. Thus, the Galaxy S22 should be more durable than other models in the past. The phone cannot be bent due to its sturdy metal structure.

In terms of “repairability”, the Galaxy S22 is as hard to disassemble as previous models, with glass attached to the case on the back. You can change just about any internal component, from the wireless charger to the battery, cameras or various internal cables and assemblies, individually. However, problems arise when changing the battery, which is attached to the housing and requires the use of alcohol to loosen the glue.

Also, one of the most common problems we can encounter with smartphones, a broken screen, requires the complete disassembly of all internal components, the screen being the last component that can be detached, in turn being glued to the metal case.

According to the PBKreviews scale, the Galaxy S22 receives a maximum score in terms of “strength”, being built to the highest standards and the most durable materials available for smartphones. In terms of “repairability”, it gets a score of 7.5 out of 10. The reason is the use of glue for more components than would be necessary, as well as because the screen is very difficult to access.

Surely, however, there will be more videos in the next few days in which we will see how resistant the Galaxy S22 models are in other situations, such as mechanical shocks from various heights.