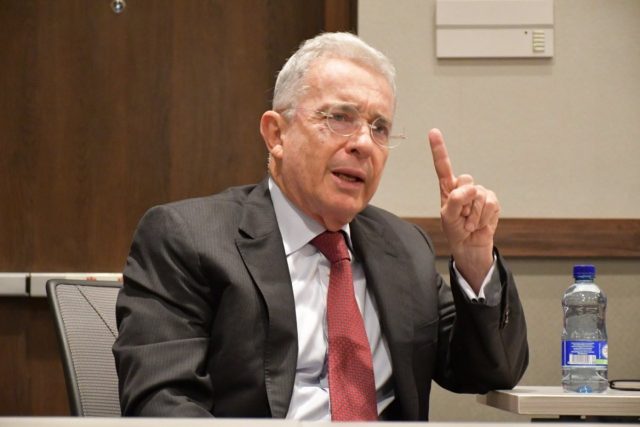 The Colombian Prosecutor’s Office has again requested on Monday, “with full autonomy and independence, and in accordance with criteria of legal impartiality”, the preclusion -similar to filing- of the process against former Colombian President Álvaro Uribe for alleged bribery of witnesses and procedural fraud.

“In accordance with the provisions of Article 294 of the Code of Criminal Procedure, and in accordance with the constitutional and legal interpretations of the Superior Court of Bogota and the Criminal Cassation Chamber of the Supreme Court of Justice, in tutela proceedings in this same case, the delegated prosecutor filed a new request for preclusion of the investigation,” he said in a statement.

After the announcement of the judicial entity, who has specified that the case falls to the third delegated prosecutor before the Supreme Court of Justice, Javier Fernando Cardenas Perez, the lawyer representing the victims has described as “cowardice” the actions of the Prosecutor’s Office.

Read:  Ukraine denounces dozens dead in a projectile attack by Russia against the city of Kharkov

“The Prosecutor’s Office is once again requesting preclusion in the Uribe case. The cowardice of a decadent institution. We will defeat them again”, reacted the lawyer Miguel del Río, who took office this year as victims’ representative in the case, as reported by Blu Radio.

The process against Uribe dates back to 2012 when the former president initiated a legal process against Iván Cepeda, senator of the Polo Democrático, accusing him of leading an alleged witness tampering to accuse him of links with ultra-right-wing paramilitary squads.

However, the process took an unexpected turn when the Supreme Court not only filed the case for lack of evidence, but opened an investigation against Uribe for that same crime and for another of procedural fraud, considering that the testimonies gathered by Cepeda were not the product of manipulation or payments.

Since then, two investigations were opened against Uribe, one for allegedly pressuring former paramilitaries to testify against Cepeda and another for bribing Juan Guillermo Monsalve to retract his claims linking the former president to the creation of the United Self-Defense Forces of Colombia (AUC) in Antioquia.