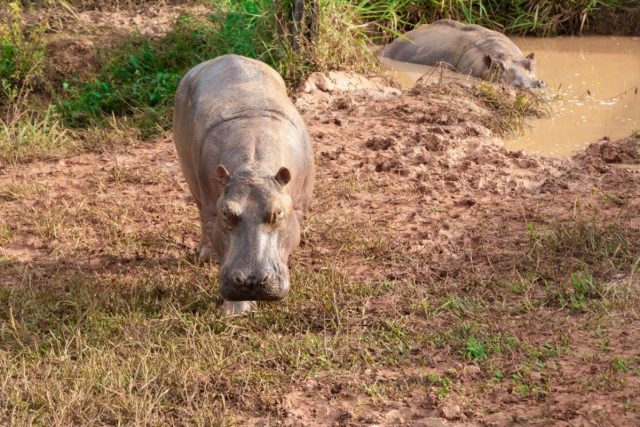 The Colombian Ministry of the Environment formalized this Friday the inclusion of the hippopotamus in the list of invasive alien species in Colombia, so that prevention, control and management measures for this species in the country can be defined.

“This is an important step to advance in an immediate action plan in order to address the situation generated by the presence of hippos in Colombia, which have caused impacts on our ecosystems and key species”, assured the Minister of Environment and Sustainable Development of Colombia, Carlos Eduardo Correa, in a statement.

The Colombian government announced last February that it would make this decision, but it was not until this Friday that it modified the first article of Resolution 848 of May 23, 2008, which regulates the list of invasive alien species in the country.

The hippopotamus was artificially introduced to Colombia in 1981 when drug trafficker Pablo Escobar imported three females and one male from an American zoo as part of his private collection at Hacienda Napoles, which later escaped confinement by dispersing on their own. Today they have become about 70 copies.

This decision prohibits the commercialization, mobilization, promotion, possession, reproduction, or propagation of the hippopotamus in Colombia, as explained by the Ministry of the Environment, which has stressed that “this species is associated with human attacks”, and that “an encounter night of a person with this animal is always fatal”.

Read:  At least four arrested in Turkey for insulting the Erdogan couple after getting coronavirus

This measure comes after the publication of an analysis carried out by the Institute of Natural Sciences of the National University of Colombia, the recommendation of the National Technical Committee for Introduced Species, as well as after the suggestions of academics, experts and former Ministers of the Environment.

In addition to the hippopotamus, Colombia has included the giant African snail, the bullfrog, the lionfish, and the spiny and smooth broom, among others, on the list of invasive alien species.