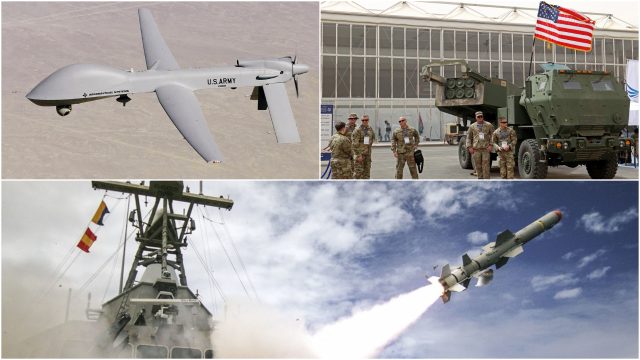 Ukraine has received advanced weapons from its Western allies, such as Switchblade drones or M777 howitzers, but the US and NATO have not yet put down the most destructive systems they have. There are three advanced weapons, quite easy to learn to use, that could bring Ukraine victory in this war.

Defense and security expert Kyle Mizokami said what they were.

The first would be the multiple rocket launcher M142 HIMARS (High Mobility Artillery Rocket System). Ukraine has repeatedly called for such systems from its NATO supporters. Americans, however, are reluctant to offer it because the weapon is controversial. HIMARS is a system that can be devastating and there is a global treaty, of which the US is not a party, that bans these weapons. The problem is that HIMARS can launch rockets full of smaller bombs, which explode over a large area and cause massive damage. Many of these bombs remain unexploded and pose a danger to civilians after the end of the war.

However, the M142 can also be equipped with precision missiles, each guided by GPS. These include a powerful warhead. The advantage of HIMARS is that it can hit targets up to 70 km away. Russian artillery (howitzers and missile launchers) can not counter the enemy at such a distance.

Ukraine has similar systems, such as the already archaic BM-21 Grade, but they lack precision. The rockets they are equipped with are not guided, and the explosive charge is not too strong.

Read:  What you need to know before you buy it

The Biden administration has said it is considering delivering HIMARS systems to Ukraine, and Senate Republican minority leader Mitch McConnell has suggested he would not oppose such a decision.

Another weapon that can weigh heavily in the balance of power is the anti-ship missile Harpoon. Ukraine has already managed to sink the flagship of the Black Sea Fleet, Moskva, using much less sophisticated missiles, R-360 Neptune, domestically produced. At the moment, Kiev is unable to export grain due to the blockade imposed by Russia on the Black Sea. Equipping Ukraine with Harpoon missiles could solve the problem. Enemy ships would be sunk or forced to stay at a safe distance from shore.

Harpoon missiles, developed in the 1980s, can be launched from trucks and have a maximum range of 125 km. The rocket flies close to the surface of the water so that it is not detected by radars. The weapon searches for the target ship alone when it approaches it, using its own mini-radar, mounted on top of the missile. The newest version, Harpoon Block II, includes GPS navigation, anti-jamming systems and has the ability to attack again if it misses the target on the first try.

The US is currently looking for allies in Europe who could quickly deliver such missiles to Ukraine.

Although the Bayraktar TB-2 drones did very well in the early, chaotic phases of the war, in the meantime the Russians have developed their anti-aircraft systems, and the efficiency of Turkish-made aircraft has declined. Ukraine has asked its Western allies for unmanned aerial vehicles MQ-1C Gray Eagle. These drones are faster, can fly at much higher altitudes, have greater range and can carry many more weapons compared to TB-2.

Read:  Explorado.ro, the first Live Shopping and Lifestyle online store, has been launched

If the Bayraktar can fly a maximum distance of 300 km from its ground operator, the Gray Eagle can reach a distance of more than 4,600 km, thanks to the satellite navigation system it is equipped with. These American drones, difficult to shoot down, can also be used as “eyes” for artillery, airplanes and attack helicopters.

The MQ-1 Gray Eagle can carry four Hellfire anti-tank missiles, each with a range of 11 km. By comparison, the Bayraktar TB-2 must fly very close to the target to drop its two MAM-L guided bombs.

Ukraine requested the Gray Eagle drone in April and has already spoken with the management of the company that produces them, General Atomics. However, Kiev needs a green light from the US government to receive them. The White House may object because these drones can be considered equivalent to cruise missiles. Their export is controlled by the Missile Technology Control Regime Treaty, which seeks to stop the proliferation of long-range weapons.