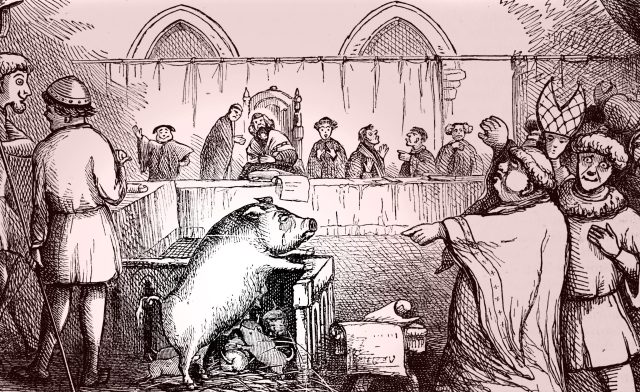 It may sound rather strange, but you can imagine being a lawyer in the Middle Ages, preparing for the new case in which the pig is put on trial for “crimes committed”. This is not a joke at all, but a practice from the past.

In Basel in 1474, the client was a chicken who was accused of witchcraft after laying an egg. What’s more, the defense was represented by a fancy lawyer. This event actually took place, and a rooster was condemned to be burned alive “for the heinous and unnatural crime of laying an egg” after several eggs were found in his enclosure.

The subsequent execution was observed “with as much solemnity as would be observed at the burning of a heretic, and was attended by an immense crowd of townspeople and peasants”. Sometimes, as was the case in 1386 in Falaise, France, animals were dressed before the execution.

The pig in question was convicted of murdering a child and was dressed in vest, linen and gloves before being led to the gallows. He was then mutilated with a knife before being hanged.

In Europe, animal trials were conducted with the same seriousness as human trials, according to historian Peter Dinzelbacher, with ordinary members of the court present, who were paid as for an ordinary human trial.

Read:  VIDEO The second season of Star Wars: The Bad Batch has received a trailer: when will you be able to see it, where

Every deed of the animal was taken into account, so that a sow was hanged in 1567 for assaulting a chick and doing so “cruelly”. Not all animals on trial were sentenced to death. A drummer’s dog bit a city councillor in Austria on the leg.

When the owner refused to take responsibility for the dog’s actions, the consequences fell to the dog, who was tried and found guilty. Instead of being executed, the dog was sentenced to a year in prison in the “Narrenkötterlein”, an iron cage in the middle of the city where criminals were locked up to be beaten and taunted.

Pigs were routinely put on trial, mainly for crimes involving death, while other animals became victims who were sentenced to death for the crime. These things took place throughout most of the Middle Ages.

In a much more recent animal execution, an elephant was hanged to death from a crane in Tennesee after being charged with murder. On September 12, 1912, Elephant Mary killed Red Eldridge, a circus acrobat who was supposed to ride on the elephant’s back.

Read:  The co-founder of Tesla is coming to Romania: what is to be launched in our country

According to accounts at the time, the elephant killed the acrobat with a kick of his trunk, being seized with rage, lifted him 10 feet in the air after which he knocked him to the ground, then thrust his tusks through his body, and then, with a kick of his leg, threw him into the crowd.

The crowd then started shouting “kill the elephant!”, leading to more ideas of execution. The first method, shooting, had little impact, with the circus manager remarking that “there aren’t enough guns in this country to kill him with”.

It is not known whether electrocution was carried out, but a railway worker claimed that 44,000 volts only made the elephant “dance a little” or did not occur due to lack of power to carry out the execution. In the end, the elephant was hanged with a crane being used while 2,500 people watched. At first, the chains broke, resulting in a broken hip for the animal. A stronger chain was used to finish the job: a modern execution of an animal for murder. At least in the Middle Ages they had trials… according to iflscience.com.