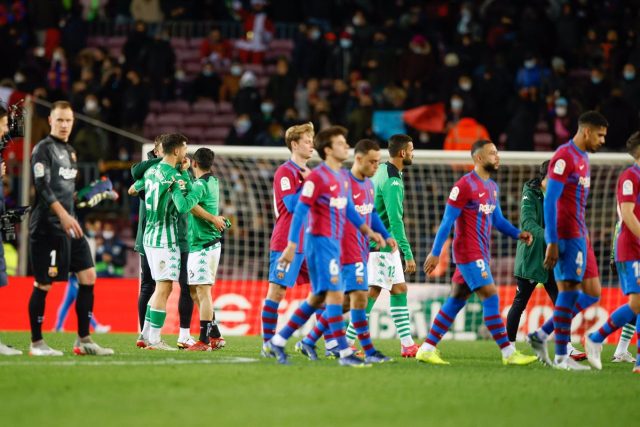 Betis and Barça fight for the ‘Champions’ between hangovers and rematches

Real Betis and FC Barcelona face each other this Saturday at the Benito Villamarín (9:00 pm), in a match on matchday 35 of LaLiga Santander, in a duel and direct battle for being in the next Champions League and between Betic hangovers after winning the Cup and airs of Blaugrana revenge for the 0-1 at Camp Nou.

There are four days left in the League and Betis and Barça coincide in marking this game as a final. The first of four. For Betis, winning would be synonymous with continuing in that fight for a ticket to the next ‘Champions’, but Barça can claim it if they take down the Verdiblancos at Villamarín.

A lot is at stake between two teams that are not in their best moment of the season. It’s time to certify and repeat the good things, but without a doubt, and Betis is still ‘copper hangover’ and paying the extras of an April Fair. Both things translate into three last days without scoring.

At Barça, the hard-fought victory against Mallorca on the last day (2-1) gave air and allowed Xavi Hernández’s men to retain second place in LaLiga. But the Blaugranas came face to face at home against Cádiz and Rayo Vallecano, and the situation is not at all to fire rockets at Can Barça.

In any case, the “minimum objective” that the club has and that Xavi demands to achieve is to be in the next ‘Champions’ – and if it is as runner-up, to go to the Super Cup, even better. And that goal, far from being one or several titles, is within reach. Winning Betis and achieving the revenge of the first leg would give the Blaugrana that fourth position, who have an 8-point margin over the Betis.

A Real Betis that also has those last four days marked in red. Manuel Pellegrini’s men want to add to the celebration of having won the Copa del Rey against Valencia by listening to the anthem of the best continental competition at home. And, fifth in the table, they must topple Barça so as not to say goodbye to that dream.

Read:  Simeon: "When the season ends, we will do analysis and self-criticism"

Pellegrini explained in the preview that to the casualties of Camarasa and Montoya, already known, will be added that of Héctor Bellerín, who woke up unwell on Friday. However, he broke the good news with Joaquín, who put on a precautionary bandage for a ligament problem that will not cause him to be absent.

In the Blaugrana team, the casualties will be those known to be Sergiño Dest, Sergi Roberto, Pedri and Nico, as well as Gerard Piqué who suffered a worsening of the long adductor tendinopathy of the left thigh. And Mingueza and Braithwaite will be doubtful, waiting for a negative coronavirus test.