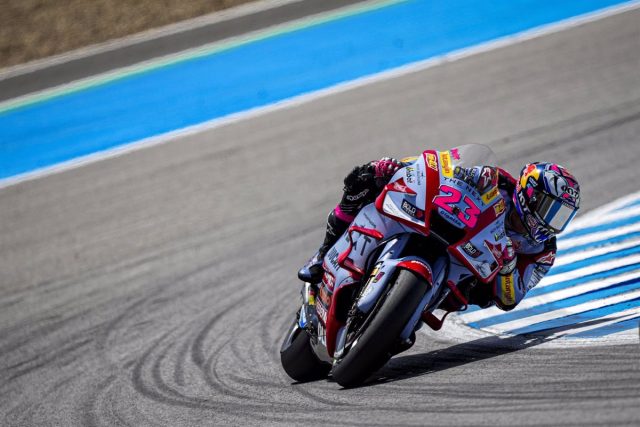 The Italian Enea Bastianini (Ducati), in MotoGP; the Spanish Augusto Fernández (Kalex), in Moto2; and the Italian Dennis Foggia (Honda), in Moto3, dominated the first day of free practice for the French Grand Prix held this Friday at the Le Mans Circuit, in which Marc Márquez (Repsol Honda) was unable to meet up again with the good feelings and finished fifteenth.

With a time of 1:31.148, a record for the French track, ‘The Beast’ has led the time table despite crashing twice, once in the morning and once in the afternoon, leading the list of riders who He has finished on gravel, like Franco Morbidelli, Joan Mir, Álex Márquez, Jack Miller or Marco Bezzecchi.

Two tenths behind the Italian finished second in the championship, Aleix Espargaró (Aprilia), who made the day’s ‘podium’ together with another Spaniard Àlex Rins (Suzuki), with both finishing a little over two tenths.

The Barcelona native managed to avoid the announcement of Suzuki’s departure from MotoGP to finish third, while his teammate Joan Mir was eighth, just ahead of Pol Espargaró (Repsol Honda) and Jorge Martín (Ducati).

Read:  Álex Márquez: "The improvements will allow us to take a leap forward and feel the Honda more mine"

The leader of the World Championship, the Frenchman Fabio Quartararo (Yamaha), finished sixth less than half a second behind the dominator on Friday, and continues to speed up his set-up to try to achieve the first victory at Le Mans for a French driver on Sunday in the queen category of motorcycling.

Things were worse for Marc Márquez (Repsol Honda), who despite saving two crashes in a spectacular way continues to show that he is not 100% and that it is difficult for him to set times to take into account. Fifteenth in the combined times, Repsol Honda’s hopes could be replaced by Pol Espargaró, ninth.

AUGUSTO FERNÁNDEZ LEADS IN MOTO2 AND FOGGIA, IN MOTO3

In Moto3, the Italian Dennis Foggia (Honda), second in the championship, led the first contact with Le Mans after commanding in the two sessions held, with a best time of 1:41.680 that allowed him to beat the Spanish by four tenths Izan Guevara (GasGas), winner in Jerez, and in five to his teammate, the Japanese Tatsuki Suzuki (Honda).

Read:  Aprilia dominates at the start in Sepang and Márquez suffers two crashes

Close to the podium positions of the day were the Spaniards Carlos Tatay (CFMoto) and Jaume Masià (KTM), who despite everything managed to finish the day well, entering the ‘Top 5’ as fourth and fifth, respectively.

Meanwhile, the leader of the World Championship, Sergio García Dols (GasGas), was weighed down by a crash at turn 10 in the first minutes of the afternoon session and could not have been more than fifteenth, a position that will force him to come back on Saturday if he doesn’t want to be forced to go through Q1.

Lastly, in Moto2, the Spaniard Augusto Fernández (Kalex) has led FP2 with a record in the intermediate category at Le Mans (1:36.030) ahead of Pedro Acosta (Kalex) who is third in the accumulated times on Friday .

The Murcian, current Moto3 champion, was only surpassed by the rider from Madrid and by the Thai Somkiat Chantra (Kalex), second of the day and dominating the morning session.