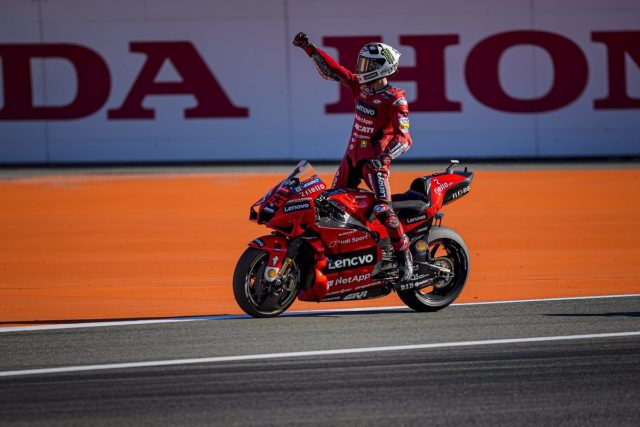 The Italian rider Francesco ‘Pecco’ Bagnaia will continue with the Ducati Corse team, the Italian factory’s official team, in the MotoGP World Championship until 2024 after renewing the contract that united both parties, with Bagnaia willing to fight for the title that will be awarded to him escaped in 2021.

With just 26 points less than the current champion of the premier class, the Frenchman Fabio Quartararo of Yamaha, Bagnaia was his great rival for the title. With this renewal until the 2024 championship, both Ducati and ‘Pecco’ are confident of doing “great things” and being able to reign in MotoGP.

Bagnaia made his MotoGP debut in 2019 with the Desmosedici GP of the Pramac Racing Team, a satellite team of the Italian factory with which he already achieved his first podium in the premier class in 2020, climbing to the second step of the San Marino Grand Prix.

Read:  The Grand Prix of the Valencian Community, chosen the best of 2021 in the Motorcycle World Championship

He was promoted to the official team last year and after achieving pole position and a third position in the opening round, he ended up being the protagonist of the World Championship, with a total of four victories, nine podiums and, in addition, six pole positions.

“In the official team I have found a serene environment: I feel in tune with the team and I am sure that together we can do great things. Now I just have to concentrate on doing well in this championship,” Bagnaia said in statements provided by the team. .

“Being a Ducati rider in MotoGP has always been my dream and being able to continue two more seasons with the Ducati Lenovo Team makes me feel proud and happy. I want to thank Claudio, Gigi, Paolo and Davide and all the Ducati staff from the bottom of my heart. Corse. I will try to repay all this confidence with great results on the track.”

Read:  UEFA investigates Atlético for "discriminatory behavior" of their fans against City

For his part, the general manager of Ducati Corse, Luigi Dall’Igna, assured that they are “happy” to have ‘Pecco’ with them for another two campaigns. “Since his arrival at Ducati in 2019, he has shown great talent and knows how to interpret our Desmosedici GP very well, adapting to riding it in any situation. He did it especially last season, during which he had a really important growth”, he valued.

“He came to play for the world title. The way he knew how to manage the races in Aragón, Misano and also Portimao and Valencia, achieving four fantastic victories is proof of his maturation as a driver. With these qualities we are convinced that he has all the potential to be able to fight together with us for the title”, he predicted.