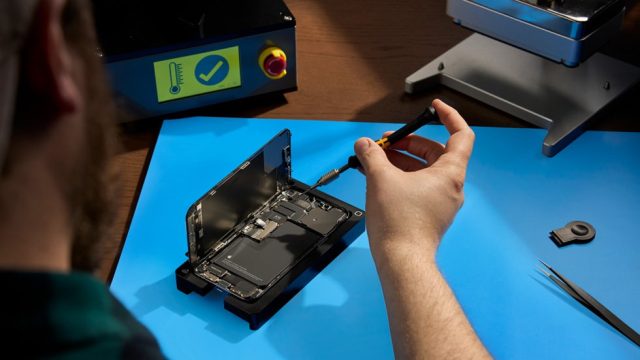 Apple has launched its home repair program, with US customers now being able to order iPhone parts to replace even outside of an authorized service center. So far, there is no other way to buy original iPhone parts, but soon the program will be extended to other product categories, such as iPad tablets and Mac computers. Of course, when it comes to Apple, the ordering process is neither cheap nor easy.

Apple offers over 200 individual components for three generations of smartphones, for starters. These are iPhone 12, iPhone 13 and iPhone SE. We are talking about components such as screens, batteries and cameras, which can now be replaced at home. The company says that the prices of these components are the same as those they charge for authorized services, so you will save, at least theoretically, labor. Basically, Apple also has some hidden costs.

The company offers professional tools for replacing the screen or for gluing the battery inside, but these are very expensive, sometimes more expensive than the components. Thus, it is possible to rent a complete kit of utensils. However, it costs US $ 50 and can be used for 7 days, after which penalties are applied. However, it includes all the presses, screwdrivers, glue and everything needed to replace the internal components of the iPhone.

While the initial price of the parts may seem high, like $ 70 for a battery, Apple will offer about a third of the initial cost back in the form of credit to those who send the broken part back.

But it is interesting to see how seriously Apple takes this program. The company offers for sale all the screws in its phones, in various packages, even depending on the color of the phone and has available all kinds of parts, such as the camera assembly, the cover for them, the speakers, the SIM card tray or even the vibration system. What doesn’t seem to be on sale is the phone case and motherboard.

Probably the most important move the company has made is launching free repair manuals for all devices included in this program. This will certainly help independent services, which were not authorized by Apple and did not have access to such documentation.

How much are the original iPhone parts

A display can cost between $ 128 for the iPhone SE3 and $ 310 for the iPhone 13 Pro Max, while the batteries range in price from $ 50 to $ 70. The bottom speaker costs $ 40, a camera system $ 111 and the Taptic Engine vibration system $ 40. These prices are below expectations for such premium components, but they will not solve all the problems.

Read:  Meta encourages the creation of multiple Facebook and Instagram profiles, making it easy to quickly switch between them

First of all, without the $ 50 rented tools, home repair operations could be quite complicated, and some users will most likely be able to damage their devices during the process. This is because the phones are sealed with hard-to-unglue glue without service tools. Purchased separately, the tools cost $ 256 for the heater and remove the screen, $ 216 for the press that installs the screen back, $ 116 for the heated “pocket” that softens the glue, and $ 100 for an original screwdriver.

Once you buy all the necessary tools, you get the price of a new phone. But you will probably be able to start providing repairs to other users.

However, it is unclear whether older generations of iPhones, such as the iPhone 11, XS or X series, will be added.

The company has promised that the next step is to expand the home repair program in Europe, but also to include Macs in this program.