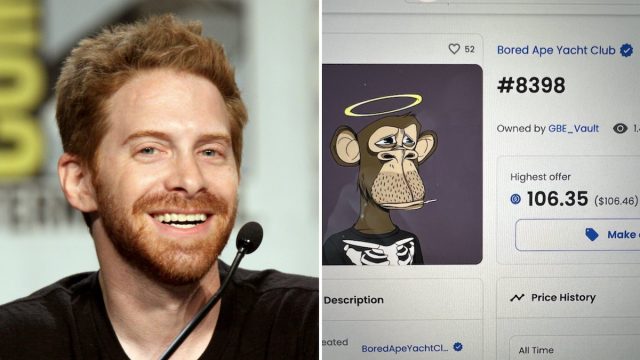 NFTs have seen a huge increase in 2021, mainly due to the fact that many celebrities have bought such digital content. Bored Ape Yacht Club is one of the most popular and valuable collections of NFTs in the world, and this makes them a good target for hackers and scammers. After several thefts from bored monkeys owned by not-so-public people, actor Seth Green fell victim to a phishing attack, in which several NFTs were stolen, including the 8389 monkey, on the basis of which he planned to carry out an animated series.

Seth Green is one of the Hollywood stars who has invested in NFTs in the last year, recently owning a monkey from the Bored Ape Yacht Club collection, as well as two other monkeys from the “Mutant Apes” collection, but also a NFT from the “Doodle” series.

Read:  The first images of Pixel 7 from Google have reached the internet. It only launches in the fall

Green announced on Twitter that he was the victim of a phishing attack, as a result of which the attacker transferred these four NFTs to another wallet. The attacker has already managed to sell the Bored Ape monkey to another user, and Green says he is in contact with the one who bought the NFT to somehow solve this situation. Twitter user DarkWing84 seems to be the one who took possession of BAYC # 8398.

Well frens it happened to me. Got phished and had 4NFT stolen. @BoredApeYC @opensea @doodles @yugalabs please don’t buy or trade these while I work to resolve:@ DarkWing84 looks like you bought my stolen ape- hit me up so we can fix it pic.twitter.com/VL1OVnd44m

According to Seth Green, the Nored Bored Ape was bought last year and was planning to make the monkey in the picture the main character of a new series:

Read:  Limiting performance on Samsung phones was just the beginning. Other Android phones also have problems with overheating

“I bought the monkey in July 2021 and spent the last few months developing and exploiting its intellectual property to make it the protagonist of a series. Then, a few days before the world debut, by the way, his name is Fred, she was literally kidnapped. “said Seth Green in an interview with Garry V at VeeCon.

OpenSea, the largest NFT trading site, has blocked the sale of the four stolen digital goods from Seth Green. However, they can be sold or transferred from one wallet to another on the blockchain network where they are registered without an intermediary such as OpenSea.