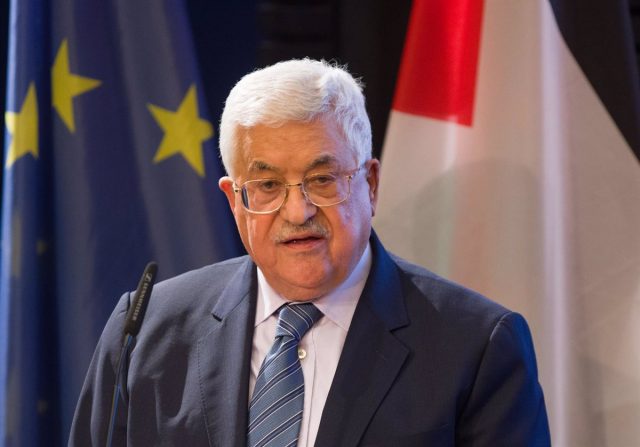 U.S. president acknowledges that the time is not right to “restart negotiations” between Israelis and Palestinians

Palestinian Authority President Mahmoud Abbas said Friday that he is “reaching out” to Israel for peace talks to end the conflict, during a press conference with U.S. President Joe Biden, who expressed support for a two-state solution “on the 1967 borders”.

“I take this opportunity (…) to say that I extend my hand to the leaders of Israel to achieve peace,” said Abbas, who stressed that “the opportunity for a two-state solution on the 1967 borders may be available today, but it is not known what will happen in the future.”

Thus, he has stressed that “peace begins with Palestine and Jerusalem” and pointed out that the continuation of the current situation “will lead to increased tensions and loss of hope for a better future.” “If Israel wants to fulfill its obligations, it cannot continue to act as a state above the law, so it must end the occupation,” he said.

“Only then will Israel be able to live in peace, security and good neighborliness with the countries and peoples of the region, based on the Arab Peace Initiative,” said the Palestinian leader, who defended that this peace will serve to achieve “a better future, for future generations and for all the peoples of the region.”

Abbas stressed that Biden is “a dear friend of Palestine” and added that his visit “shows an interest in achieving peace in the land of peace.” “Our meeting was an opportunity to discuss the consolidation of our bilateral relations and to review how the United States can contribute to prepare an atmosphere for a political horizon for a just, comprehensive and lasting peace,” he said.

In this regard, he said from the West Bank city of Bethlehem that he has conveyed to Biden “the importance of restoring the pillars on which the peace process was based, which are the international resolutions and the two-state solution on the 1967 borders.” “After 74 years of ‘Nakba’, displacement and occupation, isn’t it time for the occupation to end and for the steadfast Palestinian people to once again achieve their freedom and independence?” he asked.

“The key to peace and security in the region starts with recognizing the State of Palestine and allowing Palestinians to obtain their legitimate rights, in line with international resolutions, and ending all final status issues, including the Palestinian refugee issue,” he has argued, before reiterating that “that starts with ending the occupation.”

The Palestinian president has defended that his government “has respected international resolutions” and is committed “to fighting violence and terrorism.” “We expect steps from the United States to strengthen bilateral relations with the reopening of the U.S. consulate in East Jerusalem and the removal of the Palestine Liberation Organization (PLO) from the U.S. terrorism list. We are not terrorists,” he stressed.

In this vein, he has asked Biden for the reopening of the PLO office in Washington and has shown his readiness to “remove any obstacles to achieve this.” “We hope that the efforts of his administration will allow us to turn the page on the Israeli occupation of our land, the acts of racial discrimination and apartheid against our people and the unilateral actions that undermine the two-state solution,” he has argued.

Finally, he has called for “an end to settlements and settler violence and for respect for the ‘status quo’ at Muslim and Christian holy sites,” while describing as “a martyr” Palestinian-American journalist Shirin abu Akle, killed in May in an operation by Israeli security forces in Jenin. “The murderers of the martyr Shirin abu Akle must be held accountable,” he said.

For his part, Biden has described Abbas as “a friend” and defended that his “commitment” to the two-state solution “has not changed over the years.” “Two states on the 1967 borders with agreed exchanges of territory remain the best way to achieve an equal measure of security, prosperity, freedom and democracy for Palestinians and Israelis,” he has argued.

“The Palestinian people deserve a state that is independent, sovereign, viable and contiguous,” said Biden, who called for “two states for two peoples, both with deep and ancient roots in this land, living together, in peace and security.” “Two states respecting the rights of their citizens, two peoples enjoying the same level of freedom and dignity,” he added.

“Everyone should be treated with dignity, it’s basic,” he has said, before acknowledging that “it seems that the goal of two states seems far away when undignified actions such as restrictions on movement and travel or daily concern for the safety of your children is real.” “The Palestinian people are suffering, you can feel the pain and frustration,” he lamented.

In this vein, he has stressed that “there must be a political horizon that the Palestinian people can see or at least feel.” “We cannot allow hopelessness to steal the future,” he has pointed out, although he has acknowledged that “the time is not right to restart negotiations.” “At this moment, when Israel is improving its relations with neighbors in the region, we can feel the momentum to reinvigorate the Palestinian-Israeli peace process,” he explained.

The White House tenant has said that “Jerusalem must be a city for all its people” and called for “preserving the ‘status quo’ of its holy sites.” “The only way to fan the flame of hope is to show that things can be better,” he said, before announcing the delivery of 200 million dollars (about 200 million euros) to the United Nations Relief and Works Agency for Palestine Refugees in the Near East (UNRWA) “to continue its vital work to help the most vulnerable Palestinians, especially Palestinian children.”

Biden has also had words for Abu Aklé and stressed that “she was an American citizen and a proud Palestinian who carried out very vital work in an independent milieu and for democracy.” “Her death is a huge loss to the central work of sharing with the world the story of the Palestinian people. I hope her legacy will inspire more young people to continue her work to report the truth and stories that are often ignored,” he said.

In doing so, he has noted that “the United States will continue to insist on a full and transparent investigation into his death and will continue to defend press freedom everywhere in the world.”

“I hope that my visit will mark the beginning of a new and reinvigorated dialogue between the Palestinian Authority, the United States and the countries of the region, including Israel. Let us work together to show the people of the region, especially the youth, that the future can be better than it is today,” he remarked.

Earlier, Biden had paid a visit to Augusta Victoria Hospital in East Jerusalem, from where he announced a commitment to deliver one hundred million dollars (about one hundred million euros) to Palestinian hospitals in this area of the city. “The United States will continue to work with the Palestinian leadership, the Government of Israel and all of our international partners to ensure that the hospital network in East Jerusalem remains sustainable and is capable of delivering the high quality care that Palestinians deserve,” he said.