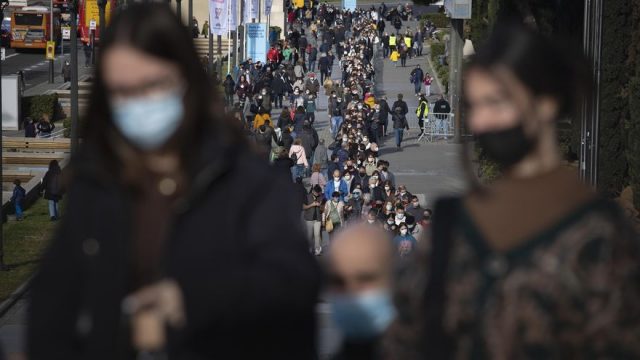 The covid-19 is once again becoming a problem in hospitals. Faced with the boom of contagions, especially in over 60 years of age, Catalonia asks the Ministry of Health to administer the fourth doses to people over 80 years of age, as soon as possible. from autumn onwards. There are also experts, such as CSIC immunologist Margarita del Val, who are committed to giving to the vulnerable patients who have not obtained a good immunological response after the first three doses, drugs such as the monoclonal antibodies, at replacement of the fourth puncture.

The pandemic is tightening. In just one month, health centers all over Spain have gone from having some 6,500 patients admitted in the first week of June to the 10,249 notified by the Ministry of Health this Friday. The cumulative incidence in the last 14 days has risen to 996 cases per 100,000 inhabitants (one month ago it was 617) and covid-19 causes an average of 40 deaths per day throughout Spain. “I am concerned that we are back to having a lot of patients with coronavirus. There are already enough of them to stress to the hospital”, certifies the Head of the Infectious Diseases Department of the Hospital Clínic (Barcelona), Àlex Soriano.

They are, of course, very old patients, who are admitted “because they are decompensates their underlying disease.” “The good part is that, at the moment, we don’t have patients in ucis because of covid. But I’m concerned that things will change in a week or two. And, also, that at a given time the age of admission will drop and the severity will increase,” adds the infectologist.

In this situation of expansion of the virus (which is essentially due to the omicron subvariant, the BA.5, the most contagious of all), the Conselleria de Salut this Friday urged the Public Health Commission to reevaluate the possibility of administering the fourth dose to those over 80 years of age before autumn. “I don’t see too much sense in having to wait in the fall.” had already said last week the chairwoman of the Scientific Advisory Committee against Covid-19, Magda Campins, on Catalunya Ràdio.

Del Val: “Immunity is not going down”.

However, not all experts agree on the need to give the fourth dose now, not even to vulnerable people. “We have not seen any indication that immunity has fallen. Immunity is lasting,” said on Monday the immunologist of the Spanish National Research Council (CSIC). Margarita del Val at the presentation of a European study on the impact of covid-19 on spanish nursing homes.

“Right now a fourth dose to people who respond well to the vaccine doesn’t make sense.” del Val defended. According to her, the third dose of the vaccine already greatly increases neutralizing antibodies. against the virus.

Del Val, moreover, put the spotlight on the fact that there are people (e.g.. very old people or patients immunosuppressed or transplanted) in which the three doses of the vaccine have not generated a good immune response. She therefore advocates giving this small group other drugs, rather than giving them the fourth vaccine.

“We know that there are between 5% and 10% of transplanted or immunosuppressed patients who will remain unresponsive to the fourth dose. It is possible that these patients would benefit more from other strategies than from a fourth vaccine.” Soriano also notes.

Specifically, he refers to the Evusheld, which is a monoclonal antibody (an artificial protein that acts like a human antibody in the immune system). It is already being used in immunosuppressed patients. “It can serve as a form of vaccination. A Form of passive vaccination.” says this infectologist.

As explained by the Head of Section of the Infectious Diseases Service of the Germans Trias i Pujol Hospital (Can Ruti, in Badalona), Roger Paredes, there are “vulnerable populations”, at higher risk, in which the “usual doses” of the vaccine “are not enough”. According to him, there are “a lot of variability” between different countries. “Some people believe that, with the fourth dose, they would get. a good response. Others, that, no matter how much vaccine there is, it fails to get to the desired protection.” he says. For example, one group of those who do not respond well are the. lymphoma patients. “There are monoclonal antibodies that remain in the blood for three to six months. We are considering these people, who are few in number, to do this treatment.”

Read:  This is the side effect of Paracetamol: Leukopenia.

The most vulnerable patients, in addition to the monoclonal antibodies that can serve as a protection against coronavirus, also have a number of antiviral drugs which are administered to them once they have already tested positive for covid-19. They are the paxlovid (“the highest priority of all”), the remdesivir (which is administered for three days to newly infected persons intravenously) and the molnuparivir (orally, but there are studies showing “lower efficacy”).

Even so, Paredes recalls that all these drugs are “more expensive” than the vaccine. “That is why we must first maximize the efficacy of the vaccine. In a specific population, it is not foolish to put fourth doses,” defends the infectologist at Can Ruti.

For his part, the internist and infectologist at the Hospital de la Santa Creu i Sant Pau (Barcelona). Pere Domingo fears the problems that antivirals could cause. “They have already been described mutations of the virus that generate resistance to antivirals. The virus will try to look for mutations that do not allow the drug to act,” Domingo points out. This is not a view shared by all his colleagues. “Right now antiviral resistance is not a frequent problem.” says Dr. Paredes.

For Domingo, however, it is “certain” that these resistances will occur. to the drugs. That’s why it’s important to keep researching and finding new antivirals. “If we had many, Would be less of a problem. But we don’t have many antivirals.” One option would be, when there is more variety of antivirals, to make “combinations” among them. The high daily transmission of the virus facilitates mutations and escapes, not only to vaccines, but also to drugs.

Domingo warns that the BA.5 subvariant, which is already present in 80% to 90% of the infections in Catalonia, is “the worst” there has been so far in terms of transmission. It is less severe than the previous ones and is not causing many admissions to ICUs. But, if hospital admissions continue to increase, so will the number of cystic fibrosis patients and, with them, mortality.