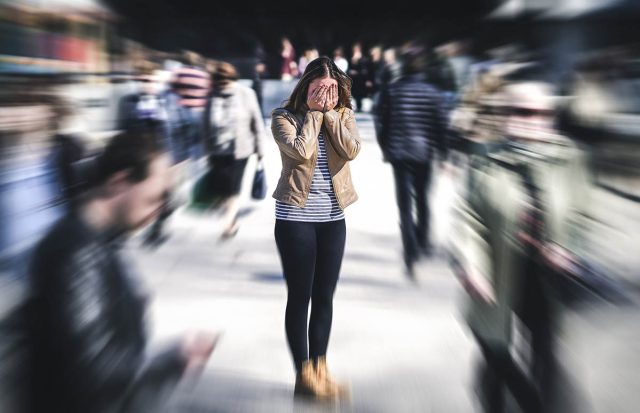 We all know what phobia means and how it makes our lives bitter. The fear of the dark, the fear of the unknown, of heights, of water or insects are quite common and we probably think that these are the only phobias that man has. Find out what are the strangest fears of people.

The strangest fears of people you never thought of

However, you will have a surprise. Read below about the weirdest phobias doctors have discovered.

10. Spectrophobia – Fear of mirrors or self-reflection

Spectrophobia is a phobia that involves a person’s morbid fear of mirrors and the horror of seeing their own reflection. It is attributed to the fear of self-knowledge and exhibitionism. It is debated whether spectrophobia has anything to do with fear of ghosts or fasmophobia. It can be seen as the fear of losing one’s perception of personal beauty or the fear of accepting certain personal anomalies, such as moles or signs reminiscent of painful past events.

It can also be labeled as a symptom of denying certain events that marked that person. In other cases, schizophrenia is one of the reasons why spectrophobia occurs. But strange as it is, it is hard to avoid nowadays, because mirrors and reflections are present in many places. It is identified and treated as easily as other phobias.

Ablutophobia is an abnormal and persistent fear of a person bathing, washing, or cleaning. Ablutophobia tends to be more common in children and women than in men, and especially in highly emotional people. Such a phobia demoralizes you and makes you feel lonely. It can be the impact of a past event that links an emotional trauma of bathing, washing or cleaning. The original catalyst can be a real fear, but the condition can also be triggered by any event seen on TV, in movies or by a situation in which someone has suffered a trauma and in which the person has witnessed.

It is different from the fear of water or hydrophobicity, because the person is not afraid of water, but of the cleaning process. The water will not bother him if it is not used for cleaning. Those who suffer from Ablutophobia feel dizzy, run out of air, sweat excessively, have palpitations, nausea, dry mouth, feel sick, tremble, get angry or lose control.

Anthophobia is a persistent fear of flowers. Although those who suffer from this generally understand that flowers are not a threat, they invariably go through anxiety when they see or think about them. Any genus or species of flowers can instill fear in them, as can any part of them, such as the petal or stem.

Anthophobia also refers to small, harmless objects, such as a torn piece of paper. Anyone can have this phobia, so if you were a little scared when your boyfriend brought you flowers, you might suffer from Anthophobia. And if you have never received flowers, you should buy them yourself just to make sure.

Dancing is part of our lives. It is an expression of mood, joy and energy. Inviting someone to a dance is a great way to find a partner. But what if someone is afraid of the idea of ​​dancing? Chorophobia is a persistent fear of dancing, whether it is a pair dance or a solo dance. Those who suffer strongly believe that they do not feel like dancing, but what they do not realize is that, in fact, they are afraid.

In many cases, people realized this anomaly when they had to dance in a club or at a prom. At the other extreme, some people discovered this problem when they had anxiety and nausea in the groom’s dance at their wedding. The treatment of Chorophobia is the same as for other phobias, but the phobia is harder to recognize. It is sometimes seen as a repulsion or just part of the personality of the person who does not want to dance.

Genophobia is the physical or psychological fear of sexual intercourse or sexual contact. The word comes from the Greek language: genos – descendant and phobos – fear. People who suffer from this phobia may be severely affected by the mere thought that they might end up in such a situation. Those affected by genophobia may give up having love affairs to avoid possible intimate relationships, which leads to feelings of loneliness. Genophobes end up feeling lonely and because they feel ashamed or embarrassed by their own fears. This type of phobia develops due to trauma. Many of those who were abused as children become genophobic.

Heliophobia is a problem that affects hundreds of people, but is not sufficiently researched. Those who suffer from Heliophobia are protected from the sun and are mostly referred to as “night birds”. They are frightened by the sunlight and try to stay in the dark as much as possible. They live in basements or basements and have been doing housework for a long time. TV, movies and especially vampire stories are some of the causes of heliophobia. Heliophobia has been considered a “sign” of vampirism in many cultures. So it is possible that the trend of Twilight movies will contribute to heliophobia.

4. Hexakosioihexekontahexafobia – Fear of the number 666

Hexakosio-ihexekonta-hexafobia is a Greek word, which in the literary sense means the fear of the number 666. It originates from a biblical verse that indicates that the number 666 belongs to Satan or the antichrist. Those suffering from this condition will strongly avoid anything related to the number 666, a notable example being Nancy and Ronald Reagan, who in 1989 changed their home address in St. Louis. Cloud Road 666 in St. Cloud Road 668.

Read:  Porsche competes with Tesla on electric cars: hundreds of millions invested in a key field

3. Nomophobia – Fear of running out of phone

Nomophobia is the fear of running out of phone, the term being an abbreviation of the phrase “no-mobile-phone phobia” in English. The name was introduced during a study by the UK Post Office, which delegated a research organization to study the anxieties of mobile phone users. The study found that almost 54% of mobile phone users in the UK tend to become anxious when they lose their phone, run out of battery or credit or have no signal.

It has also been found that almost 58% of men and 48% of women suffer from this phobia, and an additional 9% become stressed when their phones are switched off. Research has shown that stress levels caused by an average case of nomophobia can be compared to emotions on the wedding day and visits to the dentist. More than 1 in 2 nomophobes never turn off their phones.

2. Phobophobia – Fear of having a phobia

Phobophobia is the fear of phobias and, more specifically, of the internal sensations associated with phobia and anxiety. Phobophobia intervenes between the stress that the patient may feel and the phobia that he has developed and the effects on his life, in other words a bridge between the anxiety / panic that the patient feels and the type of phobia he fears, thus creating a extreme and intense predisposition to the phobia he fears.
Phobophobia differs from other types of phobias in that there are no environmental stimuli per se, but rather terrible internal sensations, similar to the psychological symptoms of panic attacks.

Phobia is the repulsion to call the phone, basically the fear of the phone. Those who suffer from this phobia say that they are afraid that they will fail to answer a phone call properly or that they will not find anything to say, which could end in an embarrassing or stammering silence.

The avoidant behavior associated with this phobia includes asking someone else (for example, family members) to answer the phone or using only answering machines. As a result, patients will avoid many activities, such as planning events or clarifying information. As is often the case with other phobias and fears, there is a wide range of gravity and the fear of telephone calls and the difficulties that correspond to them.