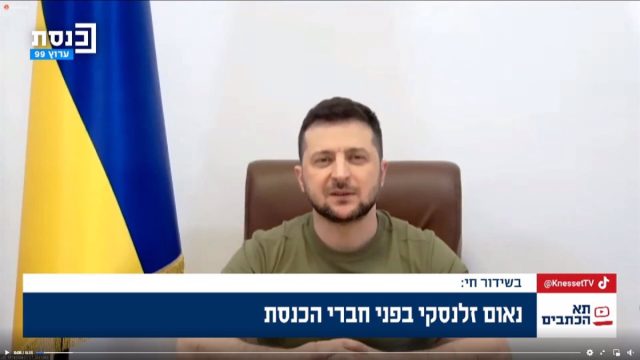 The Ukrainian president, Volodimir Zelenski, has asked Israel to abandon its neutrality and support Ukraine to avoid a “final solution”, a “genocide” of the Russian forces that have attacked his country and has thus compared this attack to the Holocaust.

“The Russians use the terminology of the Nazi party. They want to destroy everything. The Nazis called it ‘the final solution to the Jewish question’ and now in Moscow they are using these words, ‘the final solution’, but now against us and the Ukrainian question “, Zelenski said in a videoconference intervention before the Knesset or Israeli Parliament.

Russia aspires to “the total destruction of our people, our state, our culture and even our name: Ukraine”, Zelensky assured, while recalling that the date of the beginning of the invasion, February 24, coincides with the of the founding of the German National Socialist Workers’ Party in 1920.

“Our people wander the world in search of a fair place as you also wandered (…) in search of security, to survive and live in peace,” he argued, according to the newspaper ‘The Times of Israel’. Zelenski has assured that during the Holocaust, Ukraine helped the Jews and now they ask for reciprocity.

Thus, he has questioned why Israel is not helping Ukraine “not even giving visas.” “What is it? Indifference? Political calculations? Mediating without choosing a side?” She has reproached. “Indifference kills. Calculations can be wrong. You can mediate between countries, but not between good and evil,” he stressed.

“We can ask many times why you do not give us weapons. Why has Israel not imposed significant sanctions on Russia? You will have to answer these questions and live with it,” he warned.

After this speech, several Israeli deputies have expressed their “outrage” at the comparisons between the Holocaust and the war in Ukraine. “It borders on Holocaust denial,” said former minister and Likud party MP Yuval Steinitz.

“War is always terrible, but comparing a conventional war, harsh as it is, with the destruction of millions of Jews in gas chambers during the Final Solution is a complete distortion of reality,” he argued.

“I admire the president of Ukraine and I support the Ukrainian people from the heart and with deeds, but the terrible history of the Holocaust cannot be rewritten,” said Israeli Communications Minister Yoaz Hendel, who recalled that the Jewish genocide during the Second World War “it was also perpetrated on the land of the Ukraine”. “War is terrible, but the comparison of the horrors of the Holocaust and the final solution is outrageous,” he said.