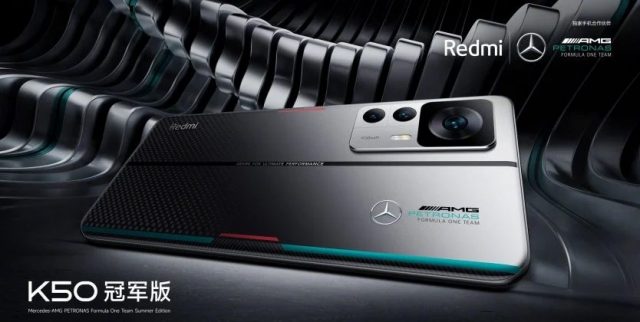 The MIX Fold 2 wasn’t the only high-end smartphone Xiaomi announced yesterday at its launch event in China. The company also announced a new flagship model for its Redmi series, the K50 Ultra, also equipped with Qualcomm’s most powerful Snapdragon 8+ Gen 1 chipset. This could however come to Europe under a different name or even a different brand, with the original K50 Gaming model shipping in Europe as the POCO F4 GT, for example.

The K50 Ultra benefits from a new design, inspired by the Xiaomi 12 series, but with the advantages of both the previous K50 Pro and Gaming models. It uses the Snapdragon 8+ Gen 1 chipset alongside a more advanced cooling system, with a 3.724mm2 vapour chamber that should ensure stable performance even after two hours of intense gaming. Given that many of the phones on the market drop 20-30 or even 40% in performance after just 20-30 minutes, these promises are interesting to say the least. The phone comes in variants with 8 or 12 GB RAM and 128, 256 or 512 GB internal storage. The display is based on a 6.67″ AMOLED panel with 12-bit colour, something we don’t see very often in the smartphone area or computer monitors. It should provide higher image quality by rendering 68.7 billion colours. The real impact, however, should be seen in the Dolby Vision HDR content that this model can play, which is truly mastered for 12-bit colour.

This panel is also unusual in that it has a non-standard resolution: 2,712 x 1,220 pixels. So far only Apple and Huawei have used such unusual resolutions on their flagship phones. The reason given by Xiaomi is that it offers a pixel density of 466 ppi, thus offering to the human eye minimal differences from a 1440p (QHD) panel but with less power consumption. Of course, this is a fast panel, at 120Hz, with 1920 levels of brightness per pixel. The screen also includes a fingerprint sensor that can apparently detect the user’s pulse as well. Cameras are the only “downgrade” from a top premium model

The phone is powered by a 5,000 mAh battery that charges at 120W, just like other top Xiaomi models on the market, using the same Surge P1 power chip. The camera system, however, is rather average: 108-megapixel main camera with optical stabilization on a rather small sensor: 1/1.67″ with 0.64nm pixels. After applying a pixel binning algorithm, the final photos have 1.92nm pixels. The secondary ultrawide camera, however, is a mere 8 megapixels, and the third camera is a 20 megapixel macro top camera. The front-facing sensor has 20 megapixels.

Xiaomi is one of the last companies to still offer an infrared sensor, for controlling home appliances, and the stereo speakers on the Redmi K50 Ultra are Dolby Atmos compatible.