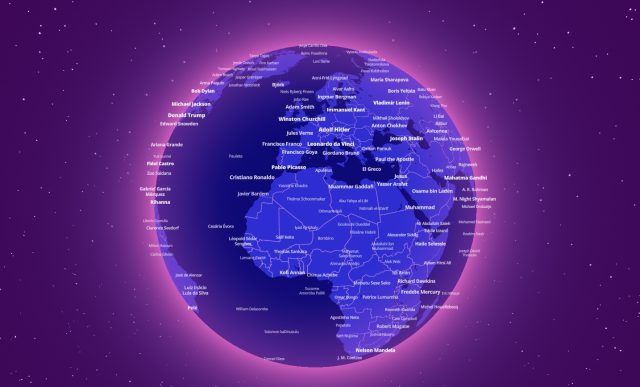 An interactive map charts the birthplaces of thousands of famous people, from political leaders and scientists to athletes and artists.

The project was developed by Topi Tjukanov and you can access it at the link above if you’re curious which famous person, for one reason or another, was born in the area where you live now.

Did you know, for example, that JRR Tolkein was born in South Africa? And that Keanu Reeves’ hometown is Beirut? Or that famous Australian actors Mel Gibson and Nicole Kidman weren’t actually born in Australia?

Topi recommends viewing the map on a desktop or even a laptop in full-screen mode to see all the details.

Read:  Top of the ugliest cars in the world

The company explains that the data is culled from a paper published in June in the journal Nature Scientific Data, which recorded birth and death data of important people from 3500 BC to 2018 AD.

If you click on the people’s names, you’ll be given a small pop-up window containing some information and a link to their Wikipedia page. The map divides the individuals into four different categories: culture, discovery and science, leadership and sport.

Which Romanian personalities appear on this map

Curious to see which personalities are listed on the map in Romania, we zoomed in a bit and discovered that there are enough important people in this corner of the world too, including Sebastian Stan, Inna, Bănel Nicoliță, Mihai Viteazul, King Mihai I, Nadia Comăneci, Zaharia Stancu, Mircea Eliade, Ion Antonescu, Emil Cioran, Milan I of Serbia, Angela Gheorghiu, Tristan Tzara, Dimitrie Cantemir, Radu Lupu, Nichita Stănescu, Matei Corvin, George Coșbuc, Octavian Paler, Imre Nagy, and so on.

Read:  What to watch on Netflix in May: the latest movies and series

In our opinion, the project is one that could be used for interactive but also educational purposes. For example, Romanian students, but also students from other countries, could learn something about our country, but also about neighbouring countries – and not only.