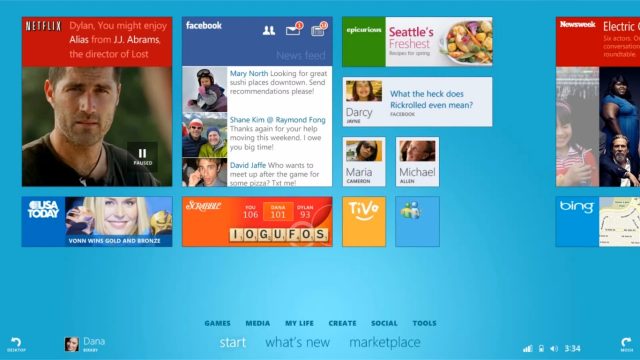 Windows 8 will go down in history as one of Microsoft’s least popular operating systems, but that doesn’t mean it will be easily forgotten. It has proposed a major change to the Windows interface, proposing for the first time use on “touch” screens, not just with a keyboard and mouse. Many of the elements introduced in Windows 8 are also found in recent versions of Windows, and Steven Sinofsky, the leader of Microsoft’s operating systems team, has published a video showing an early version of Windows 8 and how it was different from the final version.

This clip was first shown to the Windows 8 team following months of work to lay the groundwork for the project, demonstrating the direction the new operating system would take. We can see that the idea of making an operating system for touchscreens was there from the beginning and that the Metro interface was always at the heart of Windows 8, even if the final version had some cosmetic changes.

We can also see that Widgets, which have only recently returned in Windows 11, were also important during Windows 8. A separation of productivity and entertainment can also be seen in this early concept. Applications like Excel and Internet Explorer are presented in the desktop interface, while others are presented in the full-screen interface of the Start menu.

Judging from this clip, the Windows 8 project seems to have been a real success for the team behind it. It pretty much achieved all of its proposed goals, and everything worked exactly as they wanted it to. The problem has been the public response to all the interface changes, the removal of the Start menu in favour of a fullscreen interface and the slow adoption of touchscreens on laptops. Windows 8 was quickly “fixed” with Windows 8.1, which made small changes, but shortly afterwards it was Windows 10 that left pretty much all the changes behind, retaining only a few small elements of Windows 8, such as the Metro interface, which it integrated into a classic Start menu.