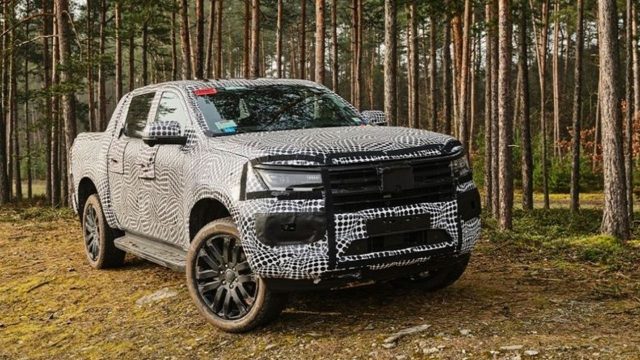 Volkswagen has given the Amarok pickup a more robust look, along with driver assistance systems and engines from its Ford Motor partner.

The second-generation Amarok, which is based on the latest Ford Ranger, will offer a wide range of driver assistance functions and a wider range of engines than its predecessor, VW said.

Amarok takes over the rear-wheel drive and two different all-wheel drive systems from Ford, as well as a 10-speed automatic transmission.

The vast majority of the 30 support systems will be taken over from Ford, with over 20 of them completely new to Amarok.

The interior will have a digital cockpit and a tablet-style infotainment display.

Amarok increases in size to 5350 mm, is 100 mm longer than the current model. The wheelbase has been extended by 175 mm to 3270 mm, allowing more space for rear passengers in the double cab.

The payload is also increased to 1.2 tonnes, and a maximum towing capacity of 3.5 tonnes is now possible for several engine and gearbox variants.

Exterior details include a tailgate framed by LED rear lights, while the front features IQ.Light LED matrix headlights from VW.

VW said Amarok’s range of engines will include a petrol engine and up to four different four- to six-cylinder diesels with a capacity of 2 to 3 liters. There will be options for rear-wheel drive, or all-wheel drive on demand or permanent.

Amarok will be sold with a double cabin and four doors, but some markets will also receive a single cabin with two doors. There will be five versions of equipment.

Read:  The Romanian who became a big star in China. Actor Vlad Rădescu seems to have struck a chord with the Chinese collective soul in the film "Ballad".

Over 830,000 units of Amarok have been sold to date in Europe, South America, South Africa and Asia-Pacific.

Amarok will be fully unveiled in the summer, before launching at the end of the year.

Amarok will be built by Ford alongside Ranger at the Ford plant in Silverton, South Africa.

An industrial partnership between Ford and VW also includes Ford’s construction of a new VW Transporter truck alongside its next Transit Custom van, production that will begin in 2023 in Turkey.

VW is building a new compact van for both companies based on the new VW Caddy at the VW plant in Poznan, Poland.