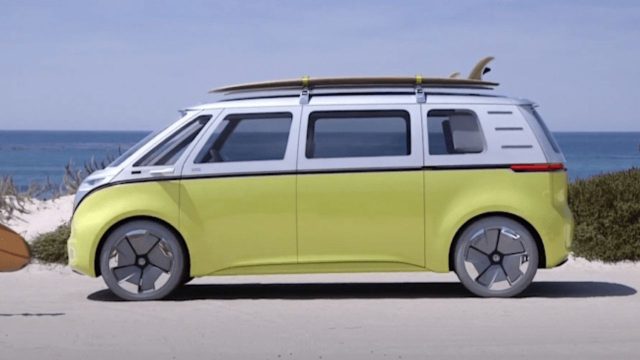 Nearly 75 years after the first Volkswagen Type 2 came out of the assembly line and entered the annals of the Americas as a counter-culture legend of the 1960s, VW is launching the flagship vehicle again – this time as an electric car.

ID.Buzz will appear for the first time in Europe and will be available with a number of options. There is even a level 4 standalone version, which will start its Shared Riding Model pilot program in Hamburg in 2025.

ID.Buzz is built on VW’s modular electric drive array and is actually the largest model ever developed for the platform. The MEB is the same base that Ford intends to use for one of its vehicles on the European market in 2023.

ID.buzz will come equipped with a 77 kWh battery slightly smaller than the 82 kWh package in ID.4, which is also based on the MEB platform, with a load capacity of 170 kw that powers a rear engine of 150 kw. It will be capable of two-way charging, at least in the European model, allowing energy transfers from vehicle to home.

Read:  Top 10 best movies on Netflix this week: what to watch this weekend

The retro has never looked so good

The passenger model will have five seats with 1.21 cubic meters of cargo space, while Cargo will provide 3.9 cubic meters by replacing the rear seats with a dividing compartment behind the front row. For the interior, VW designers were inspired by the aesthetics of the Minibus, drawing elements of style from the T1 generation of vehicles and matching seat cushions, dashboards and door trim in the color of the vehicle’s exterior paint, from which buyers will have a choice of seven options. solid color and four schemes in two tones (white + other color).

Read:  The most spectacular beach in Greece. The beach has pink sand and the sea is a stunning blue

The European version featured a number of impressive autonomous driving features, including Active Lane-Change Assist and Park Assist Plus, as well as V2X data sharing, which means that ID.Buzz can share information about road hazards with both vehicles activated around it. as well as the surrounding traffic infrastructure. OTA updates will also be standard on Buzz.

VW also noted during the presentation the extensive work it has done to reduce the environmental impact of ID.Buzz production.

Overall, VW hopes to reduce its carbon emissions in Europe by 40% by 2030 and achieve climate neutrality as part of its Way to Zero plan by 2050.