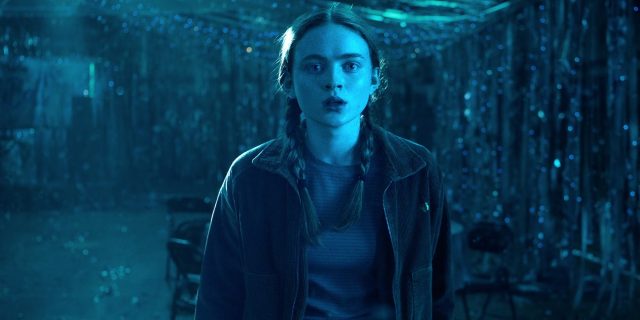 The cast of the Netflix show, including Sadie Sink, watch and react to Max’s dramatic attic scene in the Stranger Things season 4 finale.

Picking up the action eight months after the Season 3 battle at Starcourt Mall, which featured Billy sacrificing himself to save Eleven and others from Mind Flayer, Stranger Things Season 4 finds Max Mayfield played by actress Sadie Sink coping with the death of her abusive, PTSD-suffering half-brother. Max is a prime target for Vecna as she confronts those struggling with trauma and tries to get inside their heads.

Max plays a crucial role throughout season 4 of Stranger Things, as she soon becomes the final kill Vecna needs to open a series of portals to The Upside Down. During one of Stranger Things season 4’s most beloved sequences, Max breaks Venca’s spell and escapes from his lair with the help of her favorite song, Kate Bush’s “Running Up That Hill.”

The Season 4 finale finds Max and Vecna reuniting, though Max can’t escape his grip before she is blinded, has several limbs horribly broken, and dies. However, Eleven uses her powers to bring her back to life, but two days later, it is revealed that Max is in a coma.

Now, about two weeks after the last two episodes have been released on Netflix, the cast of Stranger Things reacts to Max’s dramatic attic scene from the season 4 finale. In a video shared by the official Stranger Things YouTube channel, Finn Wolfhard, Gaten Matarazzo, Priah Ferguson, Sade Sink and Caleb McLaughlin watch and react to the dramatic sequence. Watch the video below to see what they’re talking about.

As you can probably tell from their reactions, this is the first time the Stranger Things cast has seen the intense sequence in the Season 4 finale. While each cast member had a distinct reaction, they all seem equally captivated and moved by the scene. Once the scene is over, the cast laughs together, seemingly to break the tension caused by the emotional scene they just watched.

Read:  Electric cars in Romania: what you need to know, where to repair them, how much they cost

The attic scene is one of the standout sequences of Stranger Things season 4. The scene weaves together three storylines: what happens to Max, Dustin’s attempts to save Eddie, and Hopper nearly being devoured by a Demogorgon in Russia. The sequence weaves together all of these images of the main characters before Eleven can break free of Vecna’s restraints. The scene evoked not only strong reactions from the Stranger Things cast, but from fans in general.