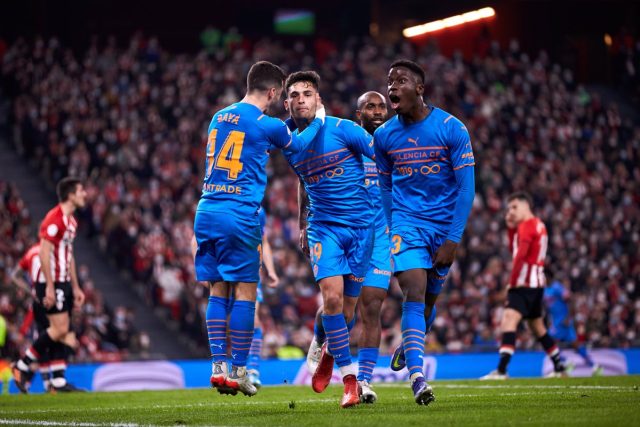 Athletic Club and Valencia drew (1-1) this Thursday in the first assault between the two in search of the Copa del Rey final, held at the San Mamés Stadium, where the locals went ahead but the visitors finished better , in search of a fully open ticket for the return trip to Mestalla.

Marcelino García Toral’s men were better in the first half, although not at the start, and scored through Raúl García, but Valencia returned to the charge and, in addition to drawing with Hugo Duro, was better. Those of José Bordalás removed complexes to submit to San Mamés, although without advantage for the outcome of March 2.

After charging Barça and Real Madrid, the Basque side suffered more than against the two at the start against the ‘che’. However, Valencia did not achieve continuity in a good entry into action, good pressure from above and arrivals with danger from the hand of Bryan Gil. Athletic took the measure and improved until making it 1-0.

Bordalás designed a good trap for Marcelino’s box, a mirror between both teams and a strong chase upstairs. Athletic was uncomfortable and Gayá and the newcomer Gil entered well on the left wing. Iñaki Williams relieved his men somewhat with good runs and the ‘lions’ bit to match the dominance.

Read:  Marc Márquez: "I'm looking forward to getting back to the top, which is where I felt most comfortable"

The match had no owner when Diakhaby came close to scoring on his goal in a slightly strong transfer that Mamardashvili kicked in the air. The Valencia center-back was stung by several Atletico players and the game won in a scuffle while losing rhythm. It was the moment for Athletic, with a couple of warnings and the goal.

Yeray warned from a set piece, looking for a second play instead of looking at the door, Williams shot the rival goalkeeper and Raúl García’s goal came on third. Muniain forced the free kick, being he who stepped on Carlos Soler, and put it like the angels at the far post. The 1-0 led Bordalás’ men off course, at their mercy and without finding a way out.

Dani García was able to double the rent before heading to the changing rooms, even with the heat of some play and with Maxi Gómez expelled in the tunnel. More problems for Bordalás and Valencia, in a game that seemed destined for the guerrillas, without that round trip at the beginning. The ‘che’ rushed to match forces and, when it seemed that nothing was happening, they found the 1-1.

Guedes from the right wing put it into the area and Bryan’s first shot left the rebound for an attentive and recently inspired Hugo Duro. Athletic went back to those uncomfortable minutes, even suffering because Valencia won all the battles. Diakhaby continued to drive more than one crazy, just like Bryan Gil.

Read:  Arón Canet, operated on for the radio fracture suffered at the Portuguese Grand Prix

Ilaix Moriba suffered more, but with the change of third it was the local team that was vulnerable, without also reaching the rival goal. Hugo Duro had the chance to score 10 minutes from the end and also claimed a penalty in the 90th minute. Berenguer had the isolated occasion of an Athletic that did not improve with the changes, stopped short by a Valencia that this time was serious in defense.

–REFEREE: Munuera Montero (C.Andaluz). He admonished Dani García (min. 63) by Athletic. And to Foulquier (min.43), Diakhaby (min.80) and Duro (min.90) in Valencia. He expelled Maxi Gómez at the break.