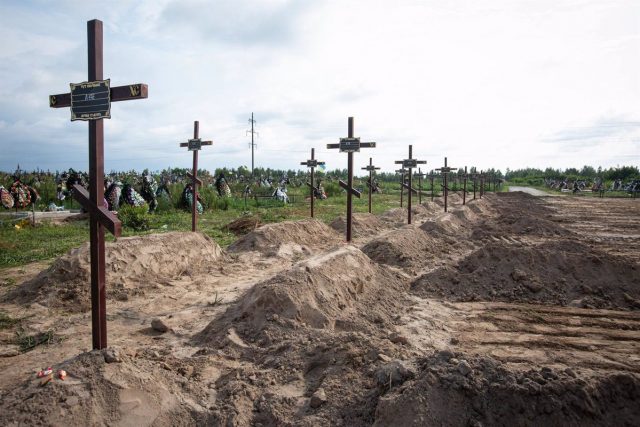 Ukraine claims to have shot down some 43,900 Russian soldiers.

Ukrainian authorities on Tuesday put the number of civilians killed during the war with Russia in the Kiev region alone at 1,352, the capital’s police chief Andri Nebitov detailed.

“As of August 15, 1,352 bodies of civilians killed by the invaders have already been found in the Kiev region,” said Nebitov, who told the story of the last person whose lifeless body was found on Monday, that of a man who was trying to flee with his family a few days after the start of the war.

As told by Nebitov, on February 28, a family was intercepted by Russian troops while trying to flee the Kiev region. “As a result, this man was killed, his wife was also killed and his 17-year-old eldest son,” the only survivors being the mother-in-law and a five-year-old minor who had to be treated for a bullet wound to the head. “She is currently safe,” he said.

Read:  The president of Peru's Congress calls for the resignation of the prime minister

“This is another crime of the Russian Army, of its soldiers, who simply shot our civilians,” denounced the head of the Kiev Police, who pointed out that they will work with the rest of the authorities to be able to clarify how these deaths occurred and to be able to bring those responsible to justice.

On the other hand, the General Staff of the Armed Forces of Ukraine has affirmed this Tuesday to have already killed about 43,900 Russian soldiers since February 24, day in which the president, Vladimir Putin, started the invasion. According to the latest death toll, this is 150 more than the previous day.

As far as material losses are concerned, the destruction of some 1,880 tanks, more than 4,150 armored vehicles, as well as about 430 air vehicles, including airplanes and helicopters, in addition to 260 artillery systems and slightly more than 130 anti-aircraft missiles stand out. The heaviest losses have been caused on the Donetsk front.