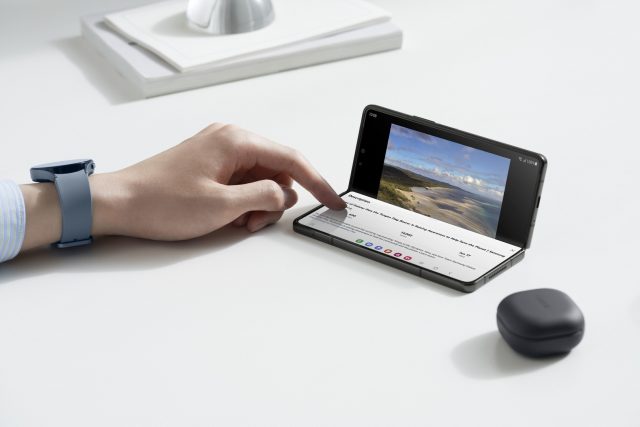 Samsung has accustomed us over the past few years to quick software updates for its top phones, as well as the possibility of receiving new capabilities on newer models, even those from a year or two ago. The same seems to be in the plan for the Galaxy Z Fold series of smartphones, which will get some of the software-level updates from the Galaxy Z Fold4 and variants from a few years ago.

The biggest interface change on Galaxy Z Fold4 is the integration of a new taskbar, which makes transitioning between apps, or joining two, three or more apps very simple with a single drag & drop gesture. This interface is inspired by the one on Samsung’s Galaxy Tab tablets, and it looks like it won’t be exclusive to the Galaxy Z Fold4 for long.

Read:  YouTube enables Picture-in-Picture support in the iOS app too

Since the Galaxy Z Fold4 is the first model to use Android 12L, it’s unclear if all the new features will be transferable to the Galaxy Z Fold3 or Fold2 (the original Fold might not get this update). The taskbar, which allows you to display your favourite apps at the bottom of the screen, could however be integrated on the previous two models even without Android 12L on the current version of the OS, according to rumours.

The fact that older Galaxy Z Fold models will get OneUI 4.1.1 with the new taskbar later this year suggests, however, that they won’t be getting the update to OneUI 5.0 anytime soon. In fact, the Galaxy Z Fold4 might not even make the switch to Android 13 until a new “L” version dedicated to devices with large, foldable screens is released.

Read:  The developer Opera announces a Pro version of its VPN service, covering the rest of the installed applications

Given that Android 12L didn’t launch until spring 2021, a OneUI 5.0 for tablets and foldables based on Android 13L is likely to come around the same time in 2022.