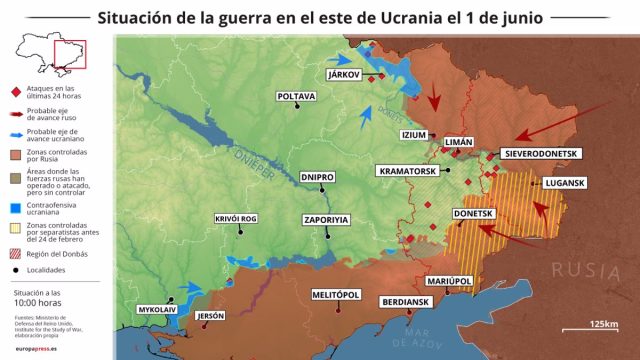 The Ukrainian Armed Forces put the number of Russian soldiers killed in combat at “about 30,700”

The Ukrainian authorities have affirmed this Wednesday that the Russian forces have taken control of 70 percent of the city of Severodonetsk, located in the Lugansk region (east) and one of the main epicenters of the conflict that broke out on February 24 by order of Russian President Vladimir Putin.

“The Russians control 70 percent of Severodonetsk,” said the head of the Lugansk Regional Administration, Serhiy Haidai, in a message on his Telegram account. “Part of the Ukrainian troops have withdrawn to more advantageous positions and prepared in advance,” he explained.

He also stressed that “there is continuous fighting in the city” and reiterated that the city of Lisichansk “is under complete Ukrainian control.” “All the settlements in the Lugansk region are under constant fire,” he has indicated while stressing that the evacuations have been suspended.

“Winning is not something quick, but it will happen. We do not betray, we believe in the Armed Forces. We are fighting for all the settlements in the Lugansk region. We are waiting for Western weapons and preparing the process to end the occupation,” Haidai stressed. .

Read:  Russia steps up strikes in eastern and southern Ukraine after regrouping troops

Hours earlier, the Ukrainian Armed Forces had reported in a statement that in Severodonetsk, “the aggressor” carried out assault operations in the northern, southern and eastern districts of the city, while the leader of the Russian republic of Chechnya Ramzan Kadirov had stressed that the city has been cleared of “Ukrainian nationalists.”

“Chechen military units and the people’s militia of the Lugansk People’s Republic have completed an operation to clear the city of Severodonetsk of Ukrainian nationalists,” Kadyrov announced on his Telegram channel, as reported by the TASS news agency.

Likewise, the regional authorities of Lugansk denounced on Tuesday that Russian forces reached a chemical plant located in the town of Severodonetsk and that it could have negative consequences for the health of citizens.

The militias of the self-proclaimed republic of Lugansk confirmed on Monday the start of the “assault” on Severodonetsk in collaboration with the Russian Army and announced that they were proceeding to entrench themselves on the outskirts of the city. 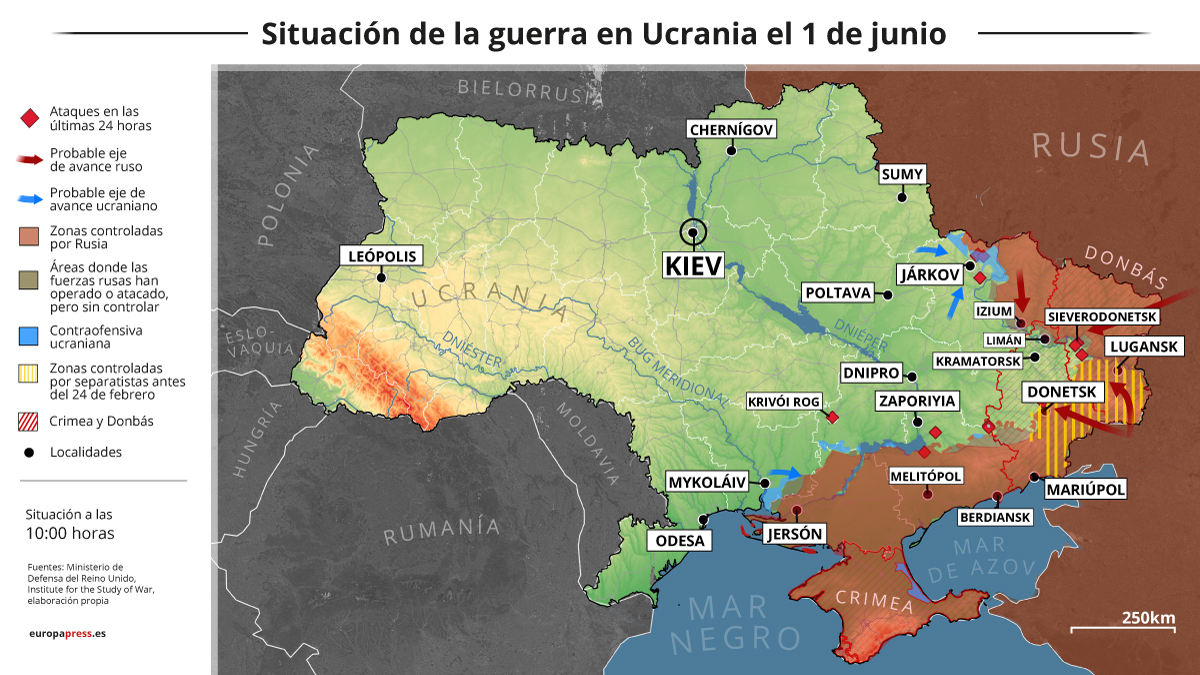 Severodonetsk was also the scene of a Russian attack on Monday that claimed the life of Frederick Lecrerc-Imhoff, a journalist and photojournalist for the French television network BFMTV. French President Emmanuel Macron was quick to condemn what happened, as was the French Foreign Ministry.

The town is the last stronghold of the self-proclaimed Ukrainian-controlled Lugansk Republic. If the offensive continues and the city is fully occupied by Russian troops, it would be a milestone for Russia.

On the other hand, the Ukrainian Armed Forces have raised to “about 30,700” the number of Russian soldiers killed since the start of the war, including “more than 200” during the fighting in the last 24 hours.

The General Staff of the Ukrainian Army has said in a message posted on Facebook that 1,361 main battle tanks, 659 artillery systems and 207 armored self-propelled multiple rocket launchers have been destroyed so far.

Likewise, it has highlighted that 208 planes, 175 helicopters, 94 anti-aircraft defense systems, 2,290 vehicles and fuel tanks, thirteen boats and 519 drones have also been destroyed, while 120 cruise missiles have been shot down.

“The Russian enemy suffered the greatest losses during the last day in the direction of Krivi Rih and Bakhmut,” he said in his message, before adding that “the data is being updated.” “Hit the occupant. Let’s win together. Our strength is in the truth”, he has settled.