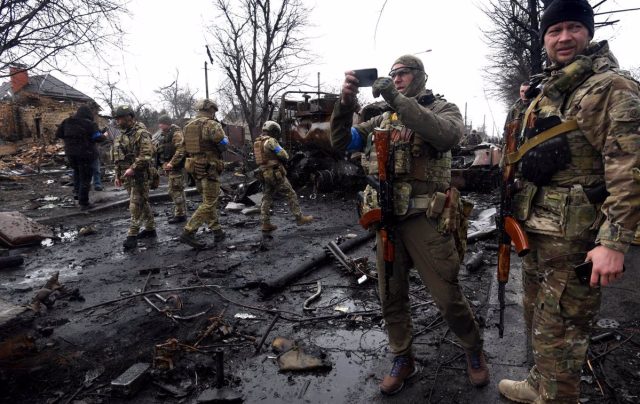 Russia warns that if this “provocation” by the United Kingdom has consequences, they will reserve the right to respond

The United Kingdom has affirmed this Tuesday that it is “completely legitimate” for Ukraine to attack positions in Russian territory if this manages to “interrupt the logistics” of the Kremlin’s war.

“Ukraine is a sovereign country that lived peacefully on its land, and another country decided to violate its borders and place 130,000 soldiers there. This is how the war between Ukraine and Russia began,” Deputy Defense Minister James Heappey recalled during an interview for TimesRadio.

“Ukraine must hit its opponents to attack their logistics lines, fuel supplies and weapons depots. This is part of the war,” insisted Heappey, who has once again highlighted the UK’s support for its Ukrainian peers during this conflict.

“It is completely legitimate for Ukraine to hit Russian military targets to disrupt their supplies. Failure to do so would directly contribute to death and carnage on Ukrainian soil,” he argued.

Read:  Ukraine claims to have destroyed a Wagner Group base in Lugansk

Ukraine’s offensive on Russian soil would be nothing more than a response to Moscow’s “uncontrollable bombing” of Ukrainian cities and towns,” explained the deputy minister, who does not consider the supply of weapons by the United Kingdom and its partners, as it is a common practice.

“This is not necessarily a problem. There are many countries in the world that use imported equipment from other countries. When you use those pieces of equipment, you tend not to blame the country that made them, but whoever shoots them,” he said. argued.

“Now Ukraine is a target and I would say they are completely legitimate military targets to disrupt Russian logistics supplies,” he stressed.

RUSSIA WARNS THAT IT RESERVES THE RIGHT TO RESPOND

These statements have not gone unnoticed by the Kremlin, which has warned that if the “provocations” coming from London have consequences, they will reserve the right to respond.

“London’s direct provocation of the kyiv regime to carry out such actions, in the event of an attempt to implement them, would immediately lead to our proportional response,” the Russian Defense Ministry has warned.

Read:  Borrell is positive about possible approval of training mission to Ukrainian Army

“As we have warned, the Russian Armed Forces are ready around the clock to launch long-range precision-guided strikes in retaliation against the decision-making centers in kyiv,” he stressed.

The Ministry of Defense has assured that the presence of advisers from Western countries in the centers where decisions are made in kyiv “would not necessarily be a problem” for Russia when “it makes decisions in retaliation”.

Later, the spokeswoman for the Russian Foreign Ministry, Maria Zajarova, called the statement released from London “monstrous” and expressed her fear of the possibility that, with these words, “the course and the agenda” are being set. from other member countries of NATO or the EU.

“What the British deputy defense minister said today crosses all imaginable boundaries of logic and politics, but at the same time reveals the true message that guides him,” Zajarova told Russia1 television.

In this line, he has urged the countries that have advocated for peace in Eastern Europe to abandon the shipment of weapons to Ukraine because he considers that “it is not logical”.