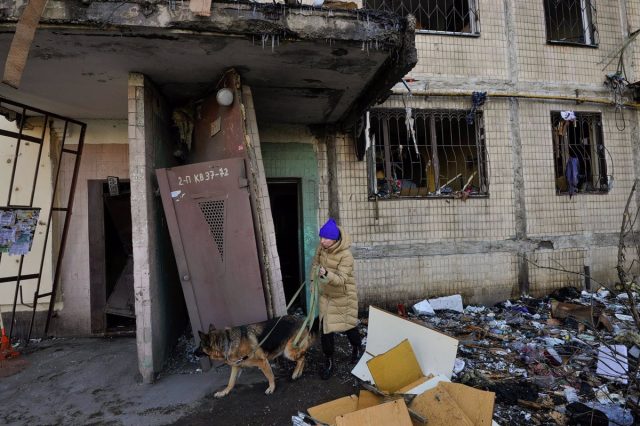 Damaged buildings in the capital of Ukraine, kyiv – Sergei Chuzavkov/SOPA Images via / DPA

At least two people have died this Tuesday due to a projectile attack on a residential building in the Ukrainian capital, kyiv, as confirmed by the State Emergency Service, which has added that another 35 people have been rescued from the building.

The agency has indicated in a message on its account on the social network Facebook that the building reached has 16 floors and has added that the impact has caused a fire and significant damage. At the site, located in the Sviatoshinski district, the emergency services continue to work.

He also highlighted that another attack on a second nine-story residential building in this same district of Sviatoshinski has caused several fires, although at the moment there is no information on victims.

On the other hand, another projectile has hit a building in the Podilskii district. A unit of the State Emergency Service has rescued a person, who has had to be hospitalized, as reported by the Ministry of the Interior on its official Facebook profile.

In addition, another two-story private residential building in the Osokorki district has registered another fire after the impact of a missile. The shock wave from several explosions around kyiv has damaged the facade of the ‘Lukianovskaya’ station building, as reported by the city’s metro on its official Facebook profile.

For his part, the president of the Ukrainian province of Kharkov, Oleg Sinegubov, has stressed, on the other hand, that the Russian Army continues to attack residential areas in Kharkov and other points, such as Chuguev, Izium or Dergachi, as reported by the agency of Ukrinform news.

As part of these attacks, in Kharkov a car of volunteers from the Help Army organization was attacked in Gorky Park on the afternoon of March 14, leaving a 26-year-old man dead and a woman seriously injured.