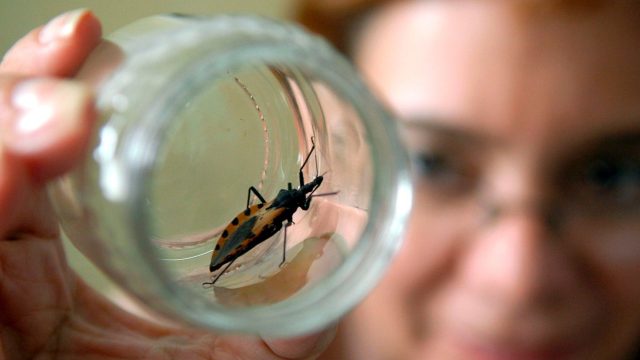 Chagas disease is a parasitic infection directly related to the precarious living conditions in some parts of Latin America, although due to immigration the disease also affects people from the United States and Europe.

Chagas disease, or American Trypanosomiasis, is caused by infection with the parasite ‘Trypanosoma cruzi’ and is classified by the WHO as one of the neglected or “forgotten” tropical diseases. Almost 80% of infections occur through the bite of these reduvid or triatomine insects (vinchucas or bedbugs).

By blood or contaminated food

It is also transmitted from mother to child during pregnancy, by blood transfusion, organ transplant or by eating contaminated food.

The cause of this “forgetting” is given because the insects that transmit it are generally found in the South American adobe houses Hence the disease is also known as the ‘poor man’s evil’-, that is, they coexist in the thatched roofs and in the cracks in the walls of precarious housing.

How to eradicate the disease

The way to eradicate it could be, then, through the destruction of its habitat, burning those constructions and replacing them with decent and habitable housing.

Read:  What is the diplopia suffered by Marc Márquez?

Chagas disease has two phases. The acute phase -the first- lasts about two months after contracting the infection. During this acute phase, despite the fact that there are large numbers of parasites in the blood circulatory system, in most cases no symptoms or symptoms are mild and nonspecific.

In less than half of the people stung appears skin lesion or purple swelling of one eyelid. In addition, it may appear fever, headache, enlarged lymph nodes, paleness, muscle aches, shortness of breath, swelling, and abdominal or chest pain.

The chronic phase of Chagas disease can present 10 to 20 years later of the initial infection, or never. In this chronic phase, the parasites remain hidden mainly in the cardiac and digestive muscle. Up to 30% of patients suffer cardiac disorders and up to 10% have digestive disturbances (typically enlargement of the esophagus or colon), neurological or mixed.

Over the years, the infection can cause sudden death due to cardiac arrhythmias or progressive heart failure as a consequence of the destruction of the cardiac muscle and its innervations.

Read:  Those affected say enough: "Don't let them tell you that period pain is normal"

Patients with Chagas may have severe symptoms in case of get covid-19. This coronavirus can cause myocarditisand chronic Chagas disease usually produces prothrombotic states, cardiac disorders, and secondary thrombotic strokes.

Chagas disease can be treated with benznidazole, and also with nifurtimoxmedicines almost one hundred percent effective to kill the parasite if administered early in the infection in the acute stage, even in cases of congenital transmission.

However, its efficacy decreases proportionally as the time of infection passes, and adverse reactions are more frequent in older ages.

Treatment with these drugs is also indicated in case of reactivation of the infection (for example, due to immunosuppression) and in patients at the beginning of the chronic phase, including girls and women of childbearing age (before or after pregnancy) to avoid infection. congenital transmission.

must be offered treatment of infected adultsespecially those without symptoms, since antiparasitic treatment can prevent or slow down the progression of the disease.