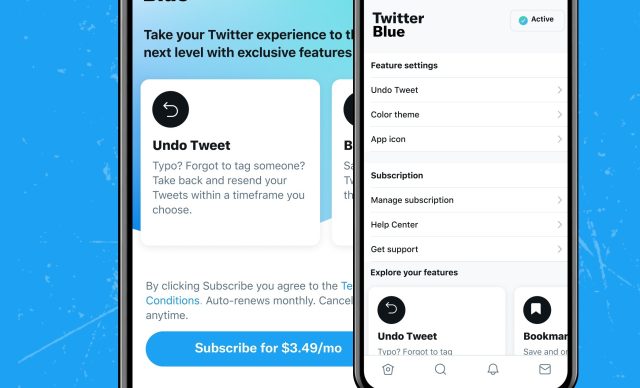 One of the advantages of the Twitter Blue subscription was the lack of ads within articles of certain partner publications you access from within the mobile app, but that feature could soon disappear. Twitter is, as we know, facing a lot of changes now that Elon Musk has officially become CEO and majority shareholder of the company, and his plan to bring the company into a profitable zone could involve giving up some user perks, even if they were for a fee.

According to the Wall Street Journal, Twitter Blue will undergo some changes in the near future. Giving up ad-free reading would be just the beginning, and it could be dropped altogether because it wasn’t attracting much of an audience anyway. Partner publications would not be greatly affected by this decision. However, the subscription, which currently costs US$5, could be made more expensive as early as next week, at Elon Musk’s behest. He would like to increase it to $20 and link the validity of the verification badge to it.

Recently, Musk has been willing to negotiate with those who have verification badges, such as novel author Stephen King. He said on his Twitter account that he is not willing to pay $20 a month for a tick in his name and that Twitter would rather pay him. Musk replied that he would be willing to lower the price to $8 for verification.

We need to pay the bills somehow! Twitter cannot rely entirely on advertisers. How about $8?

However, removing this perk from the Twitter Blue subscription could make the subscription less appealing to those who weren’t already using it, and may persuade some of those currently paying for it to give it up. Decreasing the number of subscribers doesn’t seem to be in the plan of Elon Musk, who has previously said he wants to collect more money directly from users and less from ads to keep Twitter running smoothly in the future.