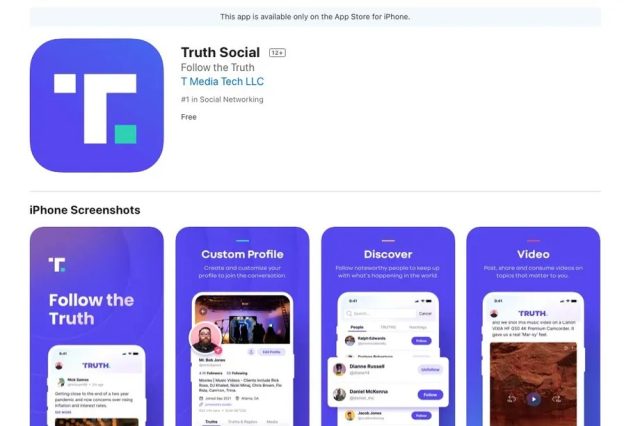 Truth Social, Donald Trump’s social network, which he announced in the fall, has been officially launched. Currently only available on the Apple App Store in the US, the new mobile app has faced several launch issues, with most interested trying to access the service without success. It appears that the request was beyond the technical capabilities of Truth Social, and simply registering an account was almost impossible.

The launch of Social Truth has been rushed to take place on February 21, the day of the Presidents of the United States of America, which is a national holiday. Given that Donald Trump is the former president of the United States and continued for many months after the 2020 elections to claim that his votes for the second term were stolen, he probably wanted to send a message for the next election. on this date.

In fact, his fight for “stolen votes” was also the reason why he was blocked from most social media platforms on the Internet. He was very active on Twitter, but had accounts on Facebook, Instagram, Twitch and YouTube, but was blocked after the attack on the Capitol building, where the presidential votes were to be validated.

Read:  Samsung has cheapened foldable phone repair to the level of a regular smartphone. On one condition

Social Truth seems to be an almost identical clone of Twitter, Trump’s favorite platform. Messages are called “truths”, which you can share with “ReTruths” (a function similar to Retweet), while the main feed is called Truth Feed. The name is not accidentally chosen, as Donald Trump has always complained about the “fake news” in the press criticizing him, and he, as well as various members of his cabinet, have invented all sorts of terms such as “alternative facts”. ) to present his point of view, different from the factual one.

Truth Social was launched in a hurry, with many technical issues

One of the controversies of the first day of Social Truth was the inability to register an account, then putting those waiting on a list, after which the information appeared that the logo of the application is “copied”, as it looks very similar to that of another company. .

One of these is the icon for Trump’s “social truth” site the other is the icon for a British “Fleet Telematics & Fuel Efficiency” company that has used it since at least 2019https: //t.co/ajIMuykZN0https: // t. co / BbnlIpMCkJ pic.twitter.com/aQssmef17x

Expectations from this platform are that it will be populated mainly by supporters of Trump and those who support the US Republican Party, conservative politicians, but also probably conspirators and members of the Qanon movement. All of them searched for alternatives on social media after Twitter and other platforms took action against Trump, but the alternative platforms proved to be inferior. With Trump’s support, Social Truth could become a real alternative to “traditional” social networks.

The application does not appear in the searches on the Romanian store of Truth Social, but can be downloaded with a US App Store account.