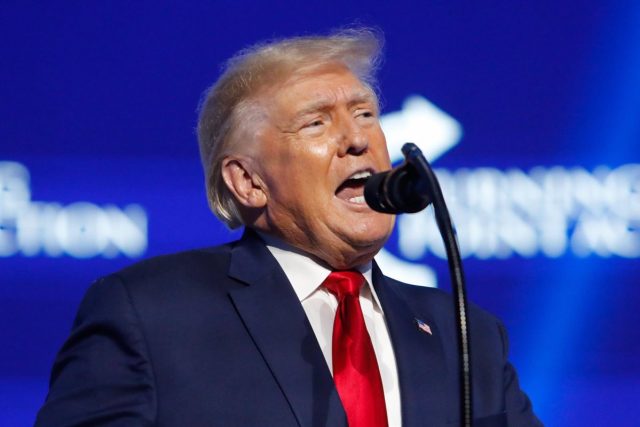 Former U.S. President Donald Trump said Tuesday that he could perhaps run for a third time in the presidential elections, which will take place in 2024, after having “won” on the previous two occasions.

“I ran the first time and won. Then I ran a second time and did much better. We got millions and millions of votes more (…) We may have to do it again,” said the former US president in a speech during a summit organized by the NGO America First Policy Institute (AFPI), according to ‘Politico’.

During his first visit to Washington, the nation’s capital, since he left the White House after losing the election to the current president, Joe Biden, Trump has stressed his willingness to discuss the Republican Party’s strategy to regain the White House in two years.

“I’m here before you to start talking about what we must do to achieve that future when we get a triumphant victory in 2022 and when a Republican president regains the White House in 2024, which I firmly believe will happen,” the former US president has maintained, has collected ‘The Hill’.

In a 90-minute speech at the summit of the NGO America First Policy Institute, Trump received a standing ovation from Republican lawmakers, former cabinet officials, administration officials, as well as donors and supporters, before delivering a speech that focused on crime and his plans for public safety.

Even so, the tycoon has also dedicated some words about the committee investigating the assault on the Capitol, assuring that the intention of the committee is to damage his image to prevent him from “working again” for the Republican Party and its voters.

“They really want to damage me so that I can no longer return to work for you, and I don’t think that’s going to happen,” Trump said of the committee’s work on Jan. 6, after which he received a standing ovation from the room. “If I stayed home and took it easy, the persecution of Donald Trump would stop immediately. It would stop. But that’s not what I will do,” he added,

On the other hand, the former US president has lashed out at the investigation into Russia’s influence in the 2016 election that marked his first days at the helm of the White House.

His visit to Washington also highlights the schism between him and his one-time vice president, Mike Pence, whom Trump has publicly blamed for refusing to reject the election results in some key states for the course of the vote.

Trump has used his recent speeches to continue to talk about the situation surrounding the 2020 election. His appearances have focused, however, on giving support to the candidates running in the November ‘midterms’ who have endorsed him throughout.