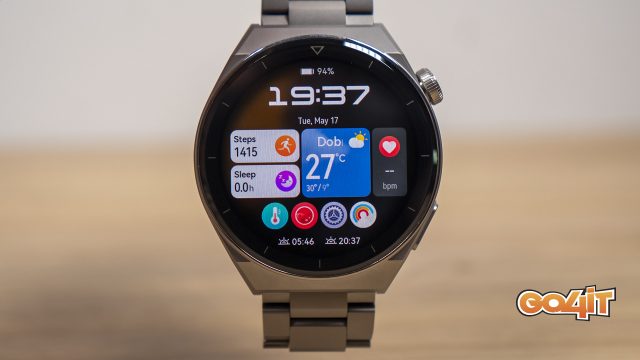 Huawei’s wearable device division seems to be receiving more attention, as it is one of the fastest growing categories in recent years. The truth is that with each release, the Chinese manufacturer manages to improve the offer of smart watches, and its latest premium model, Watch GT 3 Pro, comes with a number of capabilities that we have never seen before on smartwatches. . Of course, these, along with premium materials, also attract significantly higher prices.

If I hadn’t already known, I could swear that I had tested Huawei Watch 3 Pro again, the model I tested last year. Huawei has chosen not to change the exterior design of the watch very much in the transition from Watch 3 Pro to Watch GT 3 Pro, but this can be a major advantage, as it keeps the look of the watch “masculine”, “serious”, easy to match any clothing style. With a digital crown on the side, it has a more “traditional” watch look and does not look like a “wearable computer”, as other watch models on the market do. In addition to the crown, the Watch GT 3 Pro also has a programmable button underneath it.

The construction of this model is again made of titanium for the watch body, sapphire glass above the OLED screen, a titanium bracelet and a ceramic cover. Basically, these are some of the best materials for making watches, of course, before you get to precious metals. Huawei Watch GT 3 Pro is large, with a 1.4 ”screen and quite heavy compared to other similar watches on the market. There are also versions with a leather or silicone strap, and the straps can also be purchased separately. The color fastening system is of the “quick release” type, but it seems that any type of “traditional” watch strap, with a size of 46mm, can be used. That way, you’re not limited to what Huawei and its partners offer to change the look of your watch, or make it more comfortable.

The metal bracelet has an invisible locking system, which is operated by buttons on the side of the lock, and the links are also removable by a “quick release” system. I’ve seen this system on the Watch GT 3 and Watch 3 Pro before, and even if I haven’t tested it, I guess the straps fit between the watch models, and I don’t think there’s any difference between the Pro variants. Thus, Huawei seems to create an ecosystem of wearables, being able to pass from one to another or from one generation to another without too much effort. The case of the Watch GT 3 Pro includes a magnetic charger (which looks identical to the previous models) and a few spare links needed to enlarge the bracelet if it is too small for the user’s wrist.

I wasn’t exactly surprised that the Huawei Watch GT 3 Pro is very similar in (almost) all respects to the “standard” Watch GT 3, which I tested just a few months ago. The two watches have a similar design, but made of different materials and run the same version of HarmonyOS, ie the “Lite” version, without an integrated app store, as has the Watch 3 series. Consequently, the software functions are a bit more basic, concentrated on certain capabilities already included in the factory, with fewer possibilities for expansion. But this is also the advantage of the Huawei GT series and the reason why it became so popular so quickly. Huawei Watch GT 3 Pro promises a range of about two weeks of normal use, which also involves sports training, audio calls and other activities that consume quite a lot of battery. For such functions, the efficient processor in Huawei Watch GT 3 Pro is not very demanding. GPS running sessions are some of the few features that will put a little more pressure on the battery.

And so, if the Watch GT 3 and GT 3 Pro are very similar, how do you choose one over the other? First of all, if you want a titanium and sapphire watch, the Pro model is the only one that offers these materials, GT 3 being made of aluminum and glass. Then we have a new set of health and sports monitoring capabilities. There is the possibility of EKG testing directly on the watch, as we have seen on other models, holding your finger on the digital crown. Huawei offers this capability, but says that its results, although within legal limits, are still awaiting official certification for classifying the watch as a medical device. The new sports that can be watched through the Watch GT 3 Pro are Golf, the watch with integrated map and details about many official courses, as well as diving. Compared to all other Huawei watches, the new Watch GT 3 Pro offers water resistance for depths of up to 30 meters, being suitable for “free diving”. There is also a breath monitoring in this way, which I could not test. Personally, I don’t even know how to swim, so diving tens of meters underwater is out of the question.

Otherwise, the watch automatically detects up to 100 sports and monitors user activity in them, has automatic sleep monitoring and pulse sensors, blood oxygen saturation, temperature sensor, something that neither Samsung nor Apple currently have, as well as a way to monitor the level of stress. All information is collected in the Huawei Health app, which can then be synced to the phone’s main health app, either Google Health or Apple Health. Yes, Huawei GT 3 Pro allows you to connect even to an iPhone and is not limited to Huawei mobile devices, or Android phones. At the interface level, there are no major changes compared to the “standard” GT 3. The watch runs the same software, so almost all options are in the same places. Those who did not like gesture navigation before will not prefer it even now, and the crown is still used to scroll through the pages. Huawei now integrates some more advanced faces, which can be customized in more detail, as we have seen on other watches, more advanced in terms of software.

Thus, you can have various “widgets” on certain faces of the clock, which show what information you choose from the available ones. You can display your steps, weather, calories burned, or pulse directly on the home screen. Sure, you could do something similar on GT 2 or GT 3 before, but those faces didn’t allow for customization in detail. In fact, you can have, in addition to the right button, which allows quick access to an application of your choice, even more shortcuts to your favorite applications, directly on the screen. However, setting the clock to start on Android for the first time is a process that could make it difficult for some users. Since the Huawei Health app on Google Play is no longer updated, users have two options to install the one compatible with the Watch GT 3 Pro. Either install the App Gallery on your phone and download the version there, or download and install an APK from the company’s website.

The advantage of the version in the App Gallery is that it will configure the watch with the Huawei ID personal profile, with the information that the company already has stored in your account, while the APK version allows the use of the watch without an account, but requires more configuration (gender, age, height, weight) for better monitoring.

Then, the version in the App Gallery gives you access to the Clock App Gallery, which allows you to install applications other than the factory ones, while the APK version does not have such capabilities, nor does it allow you to buy or download new faces. Basically, the app allows the watch to work like this, but the full experience can be found in the app in the App Gallery. These issues do not occur on Huawei phones, as they have everything you need for quick connection built into HarmonyOS.

But the biggest disadvantage of the Huawei Watch GT 3 Pro, from my point of view, is the lack of a payment system. The watch is equipped with NFC, and the Huawei Health application and the watch have a “Wallet” in the menu, but it is not available in Romania. The company’s priority should be either to bring Huawei Pay to us in the country, or to allow other banking payment systems, such as BT Pay or ING Pay, to integrate with the clock. Watch GT 3 Pro is the logical continuation of Huawei’s series of smart watches, offering demanding users one of the best built devices of this kind on the market. The software is simple, so easy to learn and well developed, and the autonomy is very good. I couldn’t test the watch for two weeks to test it leisurely if it reaches the 14 days declared by Huawei, but even with extensive buttoning for a few days, it was only necessary to charge it once, at first.

The only impediment to the success of this model would be the price. Huawei did not provide information in this regard before the launch, but specified that it is a “premium”, in line with the competition in the market. Thus, even if at the time of writing the article I do not know exactly how much Huawei Watch GT 3 Pro costs, I expect at least 2,000 lei on the shelf for this version with a titanium bracelet, or maybe even more. Along with the 46mm Watch GT 3 Pro, Huawei also launched a female version, 43mm, with a ceramic body. This model offers less autonomy, of 7 days, but otherwise benefits from all the advantages of the larger model. This model could be even more expensive, Huawei mentioning in particular the very complex manufacturing process, the ceramics requiring a few days from the beginning to the end of processing to be modeled in the right shape for the watch.