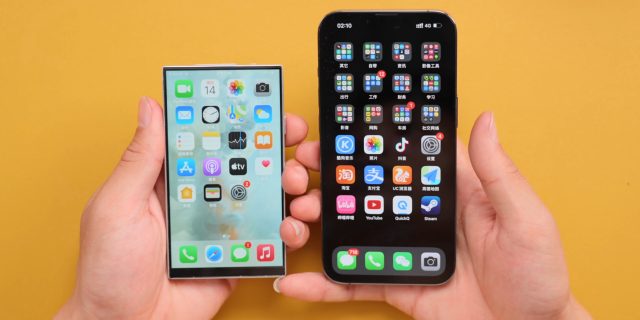 The first iPhone without a notch and with USB-C already exists and is not called the iPhone 14 Pro. Apple’s 2022 model will drop the much-criticized cutout of the screen, but an iPhone user in China has already done so. YouTuber Aio Technology has turned an iPhone SE 2022 into one of the smallest and most exciting mobile devices on the market. This is a “custom” iPhone that has everything Apple users want: a notchless screen, Touch ID fingerprint unlocking, and charging via a USB-C port. It is also equipped with the most powerful mobile processor from Apple, the A15 Bionic model.

The iPhone that Apple refuses to build already exists

Basically, we see a kind of “recharging” an iPhone SE in a custom case. The “new” iPhone benefits from the motherboard and 4.7 “LCD screen on the cheapest model in Apple’s offering, in an even smaller format. Somehow, Aio Technology managed to cut out all the components of this model and integrate them into a smaller case. The screen has square corners, not rounded, as we see on recent iPhone models, and at the bottom we see a small “chin” needed to accommodate all the components of the LCD screen.

Read:  Is China's golden era as a global smartphone supplier coming to an end?

The power button is mounted on the side, but the fingerprint sensor is moved to the back, along with the Home button, something that the iPhone SE model integrates at the bottom of the screen. For those wondering where the front camera is, it is housed in a proprietary “pop-up” system, which can be raised when needed and hidden when the camera is not in use.

In addition to switching to USB-C from Lightning, the “New iPhone” comes with a headphone jack, something we haven’t seen on the iPhone since 2016, when the iPhone 7 was launched. Wireless charging is still present, however, for those who prefers that.

Read:  What does the Troll farm look like in an apartment in Ukraine, connected by 3000 SIM cards to promote Russia Unfortunately, this phone is just a concept, a demonstration of technology that proves that Apple could create such a device if it really wanted to. Unfortunately, in order to receive all these capabilities on the newest iPhones, we will probably have to wait a few years.