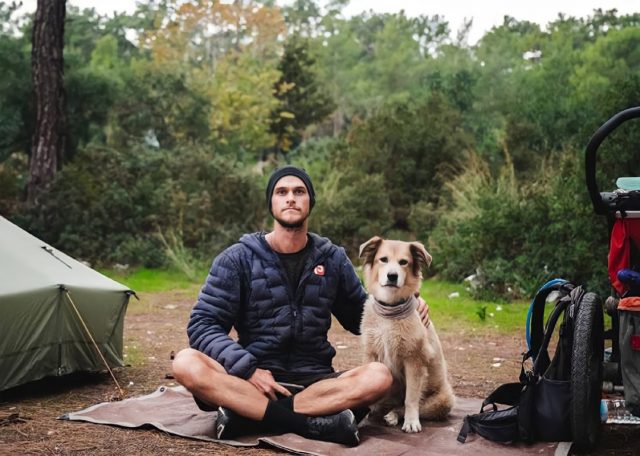 Many young people have other interests, including entertainment, high-tech and more. But one young man chose to do something different and circled the Earth with man’s best friend, his dog.

Tom Turcich of New Jersey is the tenth person to have made a trip around the Earth with his dog. He completed the journey on 21 May 2022, and his dog Savannah is the first dog to achieve the feat. The journey took seven years and measured 48,000 kilometres.

“I’d been imagining for a long time what the end would be like. And when it happened, the main thrill was just relief. This has dominated my life for 15 years, and to finally finish it was amazing,” the young man said.

What inspired Turcich to take this step was an unfortunate event in his life in 2006, when a friend of his, Ann Marie, died in a jet skiing accident at just 17. That was the moment he realized he wanted to travel and explored all the ways he could do it.

After seeing in the Guinness Book of Records that Steven Newman was the first person to walk around the world, he decided that this was his goal. After getting a job, Turcich began planning the itinerary, as well as raising the funds for his journey.

He was able to raise enough money to last financially for two years on his trip, but a local company owner found out about his plans and decided to sponsor the trip. After nine years, Turcich was taking the first step on what was to be his round-the-world trip and certainly the trip of a lifetime.

Read:  Pink Floyd returns with a new song dedicated to Ukraine after 28 years: the Ukrainian who provides the vocals for the song "Hey Hey Rise Up" has joined the army

He began his journey on 2 April 2015, when he was 25 years old. He set off with a baby stroller in which he kept hiking equipment, sleeping bag, laptop, camera and plastic crate for storing food.

Although this trip should have taken him only five years, it took seven years because of delays. The first such delay occurred when the young man fell ill and had to spend months recovering, and then the coronavirus pandemic followed, throwing his plans into disarray.

The first part of the trip consisted of going from New Jersey to Panama, and after four months, Turcich picked up a traveling companion, the four-legged Savannah, from a shelter in Texas. He hadn’t intended to take a dog when he started his journey, but because he heard noises at night, he decided someone should stand guard.

He circled the Earth in a seven-year journey

Turcich even decided to set up a Patreon account so his followers could donate money to continue his journey. In his second year, he reached Colombia and the Urugay from where he took a ship to Antarctica.

This was when Turcich went all the way home to get what he needed to travel to Europe with his puppy. The traveler and the puppy traveled through Ireland and Scotland, where Turcich had to stop to recover from illness. In 2018, he resumed his trip to Copenhagen, but had not fully recovered.

“There were definitely times when I wasn’t feeling well at all and I was thinking: “What am I doing here? I could be with my family and friends and instead I’m walking through this cold rain in Germany.” But I don’t think I would have ever stopped. I had been thinking about this walk for eight years before I started it. So it would have been crazy to quit after a few years,” he told CNN.

He went on to walk the Camino de Santiago, which involves traversing routes in Spain, France and Portugal, and became increasingly determined to finish his journey. Then he and Savannah arrive in North Africa from where they set off for Morocco, Algeria and Tunisia.

Read:  The first Star Trek NFTs, ready to launch: when you can enjoy them

He went on to travel through Italy, Slovenia, Croatia, Montenegro, Albania and Greece, and then on to Turkey where he was allowed to cross the Bosphorus Bridge on foot, the first citizen to be granted such access. Further on he headed for Georgia and Azerbaijan, which was also the time when the pandemic was hitting full force globally.

For six months he stayed in the latter country, and due to pandemic restrictions, he gave up visiting Australia and Mongolia, which were closed to international visitors for two years. In August 2021, he and Savannah fly to Seattle, setting off for home.

Turcich and his dog travelled six continents and 38 countries, most nights sleeping in tents. A typical day for them meant covering 29-38 kilometres, and by the time he arrived back in America, he was increasingly eager to complete the journey and return to a non-romantic life.