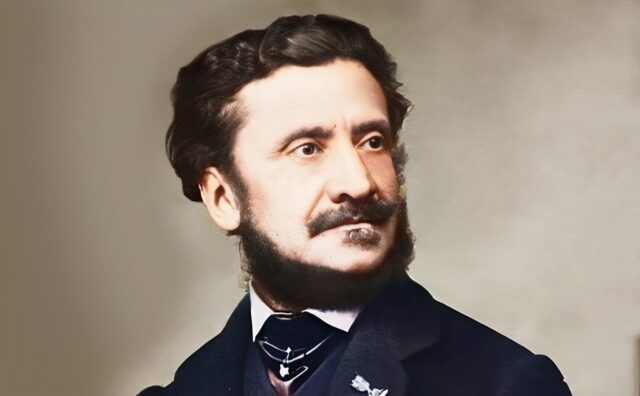 Painter, graphic artist and, ultimately, photographer – that’s how Carol Popp de Szathmáry could be described. However, one of these talents was to make the Transylvanian immortal.

Carol Popp de Szathmáry was one of the most important photographers of the old days, one without whom history would not be complete now, as you will learn from the following.

Carol Popp de Szathmáry was born on 11 January 1812 in Cluj, the son of Daniel Szathmáry and Suzanne Vass.

Years later, he was to become the world’s first war documentary photographer, and an important fine art photographer as well. Clearly, his talent for drawing, painting and graphic design helped the artist to perfect the latter.

He went to school at the reformed high school in Cluj, then worked for a short time as a clerk in the “guberniul” of the Ardelen, and also at the visteria di Sibiu, and later held positions in the chancellery of the Ardelen court in Vienna.

His love for Maria Văcărescu, who was to become the wife of others, brought him to Wallachia. Unfortunately, his feelings were not shared, so Carol Popp de Szathmáry preferred to devote his time to his studies.

Later, he went to Italy, and from there he set off on a journey to the Orient. He eventually returned to Vienna, where he perfected his watercolour technique.

With the help of Count Bethlen, Carol Popp de Szathmáry set up a free painting school.

In 1843, Szathmáry met Vodă Bibescu in Borsec, who proposed that he settle in Bucharest. It was here that the artist set up his first photography laboratory.

The photography laboratory in question was built on a piece of land rented from Ștefan Greceanu on the Mogoșoaiei Bridge.

During the Crimean War, Carol Popp de Szathmáry produced several war sketches, which he compiled in several albums that were highly appreciated by representatives of the royal courts of Europe. He was often rewarded for his efforts, receiving both gifts and praise.

Years later, together with Nicolae Grigorescu and Sava Henția, Carol Popp de Szathmáry went to Bulgaria to photographically document the War of Independence. He left behind hundreds of photographs that inevitably are now part of world history.

Alexandru Ioan Cuza made him an official court painter and photographer, and Charles I in turn held him in high esteem

Years before the War of Independence, Carol Popp de Szathmáry was appointed by the ruler Alexandru Ioan Cuza as official photographer and court painter.

Read:  BMW joins Toyota: what the Germans want to invest in

Later, the artist was equally appreciated by King Carol I, who gave him the title of artistic advisor and invited him on all his trips around the country during that period.

Having been given this opportunity, Szathmáry exploited it to its full potential, depicting rustic corners of the country, landscapes, horeas, portraits of villagers and more.

Many of these works are now part of the chromolithographic albums edited by the photographer together with the lithographer Grassiany.

“As a photographer, Szathmáry showed not only great professional skills, but also great taste and ingenuity in his choice of subjects, usually old monuments or folk types, which did not contradict his inclinations as an artist”, wrote academician G. Oprescu.

His legacy includes, among many others, the collection of prints at the University Library “M. Eminescu”, in Iași, consisting of two original photographic albums, also unique in our country.