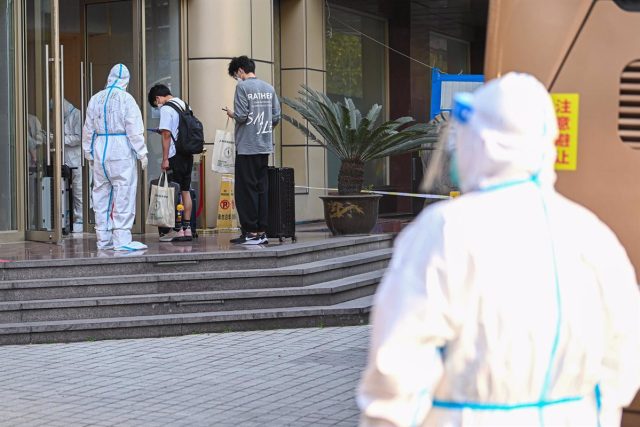 The US Department of State has ordered non-emergency personnel and their families to leave the consulate in Shanghai due to the increase in COVID-19 cases and the impact of restrictions related to the response of the State Department. Chinese government.

The United States on Friday allowed the voluntary departure of non-essential employees from its consulate in Shanghai. In this sense, the State Department has argued that the change from “authorized” to “ordered” departure implies that this decision is no longer voluntary.

“Our change in position reflects our assessment that it is in the best interest of our employees and their families to reduce their numbers and scale down our operations as we deal with changing circumstances on the ground,” the Embassy said in a statement, adding that ” employees and family members will depart on commercial flights.”

US mission personnel “will continue to be available 24 hours a day throughout China to provide emergency services to US citizens.” The US authorities have indicated that, when conditions allow, the services to issue visas will remain open to the public and the consulate facilities will reopen.

“For US citizens in Shanghai who wish to depart from China, commercial flights remain available but are limited. We are committed to the issue of airport access for US citizen travelers with confirmed tickets,” the Embassy said in the statement.

The State Department already issued a warning to its citizens this Friday to reconsider traveling to China due to the “arbitrary application” of restrictions that the Chinese government is imposing due to the COVID-19 outbreak that the country is facing.

“The Chinese government arbitrarily enforces local laws, including making arbitrary and unjust detentions and using exit bans on US citizens and citizens of other countries without due process of law,” the State Department said in a statement. .

According to the United States, China would be imposing these sanctions to obtain negotiating influence over foreign governments, pressure family members to return to the country, or even force scientists to participate in research carried out by the Chinese government.

In addition, the US government warned that, “in most cases”, citizens only find out about the ban when they try to leave the country. “There is no reliable legal mechanism or process to find out how long the ban could continue or be challenged in a court of law,” he added.

The Chinese Ministry of Foreign Affairs showed its disagreement on Saturday with the warning that the US State Department issued this Friday to its citizens, suggesting that they not travel to China due to the “arbitrary application” of restrictions against the coronavirus.

“We express strong dissatisfaction and firm opposition to the US side’s baseless accusation of China’s epidemic prevention policy in its statement, and have made solemn representations to the US side,” said Zhao Lijian, spokesman for the ministry. it’s a statement.

There are currently about 25 million people in Shanghai under lockdown since last week, which has led some of the population to complain about food shortages. However, Beijing continues to stick to the “zero tolerance” strategy and is determined to “crush the outbreak” in the city. Thus, it has sent more than 38,000 workers and 2,000 soldiers to the area.

The authorities announced earlier this week their decision to extend indefinitely the confinement decreed by the rebound in coronavirus cases, after carrying out tests on Monday on its 26 million inhabitants.