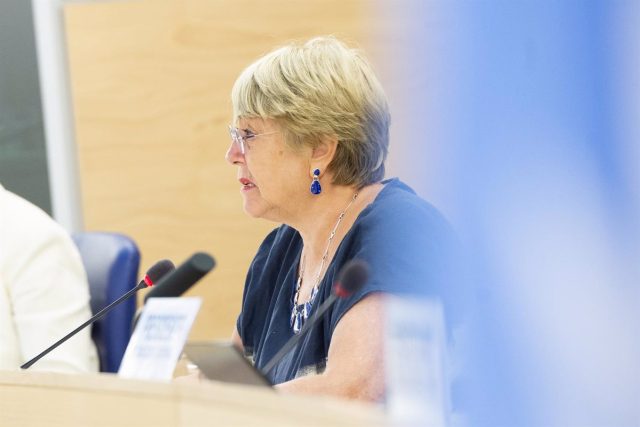 The United Nations High Commissioner for Human Rights criticized the military coup in Burkina Faso on Tuesday and called for the “immediate” release of the president, Roch Marc Christian Kaboré, and a “quick” return to constitutional order.

The agency’s spokeswoman, Ravina Shamdasani, stressed that the head of the office, Michelle Bachelet, stressed during a visit to the country in November the “importance of preserving the hard-won advances at the democratic and human rights level.”

“During the High Commissioner’s visit we noted a growing frustration and impatience with the deteriorating security situation in Burkina Faso in the face of increasingly violent attacks by non-state armed groups and other violent actors in the Sahel region and with the authorities’ response,” he said.

Thus, he has argued that “in the face of the security threats and the tremendous humanitarian challenges that the country is facing, it is more important than ever to guarantee the rule of law, the constitutional order and that the country’s obligations under Humanitarian Law are fully respected”.

“It is crucial that democratic space is effectively protected, ensuring that people are able to express their differences and aspirations and engage in meaningful dialogue to work towards addressing the many crises in the country,” Shamdasani said. who has added that the body “will continue to monitor the situation of human rights in the country.”

The body’s statement came hours after the UN Secretary General, António Guterres, condemned the coup and called on the mutinous military to lay down their arms and start a dialogue to overcome the crisis.

The G5 Sahel – made up of Burkina Faso, Chad, Mali, Mauritania and Niger – has added to the criticism – which has shown its “great concern” about “the political and military events in Burkina Faso” and has warned that “could jeopardize democratic advances in the country.”

“The G5 Sahel, faithful to the ideals of peace, security and democracy, strongly condemns the attempt to interrupt the constitutional order,” he said in a statement in which he asked that “the physical integrity” of Kaboré and the rest of the detainees.

“The G5 Sahel asks all the parties to privilege dialogue to resolve all differences calmly and serenely,” he said, in line with the condemnation expressed during the day on Monday by the African Union (AU) and the Community Economy of West African States (ECOWAS).

The ECOWAS has reported during the day in a statement that it will hold an extraordinary summit to examine the situation in Burkina Faso “in the coming days”, while stressing that the coup “marks a great democratic setback” for the country.

The President of France, Emmanuel Macron, has joined the condemnations and has confirmed that he has already held “first conversations with leaders of the region”, as reported by the Radio France Internationale station.

Read:  Brussels denounces Russia's "war against women" in Ukraine and asks to ensure their right to abortion

The coup d’état came after a military mutiny on Sunday in protest at insecurity and the lack of means to deal with jihadism, which is why the soldiers demanded the resignation of Kaboré and other high-ranking members of the security forces.

The mutiny took place about two weeks after the authorities announced the arrest of eight soldiers, including a commander, in connection with an alleged plot to “destabilize” the country’s institutions. They also suspended access to Facebook last week for unspecified security reasons.

Burkina Faso Prime Minister, Lassina Zerbo, recognized in early January that the country is going through an “extremely worrying” security situation and advocated making “national reconciliation” one of the lines of action to restore peace and security, after that this instability has already left more than 1.5 million displaced since 2015.

The African country has generally experienced a significant increase in attacks since 2015. These, the work of both the Al Qaeda affiliate and the Islamic State affiliate in the region, have also contributed to increasing inter-community violence and have made that self-defense groups flourish.

In this context, at least four soldiers died on Monday from the explosion of a bomb as their vehicle passed in the province of Yatenga (north), according to the Burkina Faso news portal Infowakat, without for now claiming responsibility for the attack. .