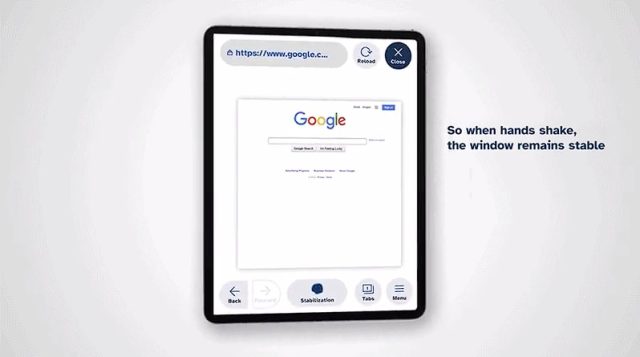 Staybl started as a solution to avoid “moving” pictures, but could find new applications in unsuspected areas.

Based on the same principle that led to the success of smartphone cameras, compensating for involuntary hand movements could be the ideal solution not only for stabilizing photos, but also for the web browsing experience.

According to the team of developers, the reasoning behind this technology is not only related to the use of tablets in not exactly ideal conditions, but also to addressing some shortcomings related to health problems.

Although the effects of Parkinson’s disease, “a long-term degenerative condition of the central nervous system,” may take years to manifest, the first symptoms include tremor in many parts of the body, but most commonly in the hands, disturbing even the most mundane activities. That’s why, in the past, we’ve seen companies develop assistive devices, such as stabilized spoons, that compensate for the involuntary shaking of the hands, allowing those with Parkinson’s disease to eat almost normally.

The web browser suggestively called Staybl was created to do the same thing, but adapted to the most plausible context of users who are simply trying to access common sources of information in the context of their own health problems.

The app was developed by Havas New York and Havas Germany, who spent two years working with the German Parkinson’s Association and Parkinson’s patients in Germany and the United States to test and optimize the app. Essentially, the app relies on the accelerometer of an iPad to detect subtle movements of the trembling hands and then moves a web browser window across the screen in the opposite direction to cancel those movements, giving the user a steady, steady view of a web page. while handling your phone or tablet.

Read:  Android 13 will highlight apps that consume too much battery

Google announces “Results about you”, the utility that helps you remove your personal data from Google Search

Microsoft redesigns Photos app. What the new interface looks like and what features are going away