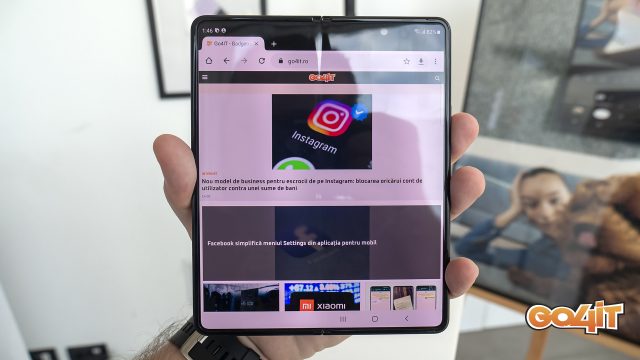 Samsung is a true pioneer of folding screens in the mobile space, being the first company to bring such products to the global market, after various attempts by smaller companies. Unfortunately, the company’s innovation in this area is very slow, all phones launched in the last three years in this category being similar to the first generations. Samsung’s biggest problem with foldable phones seems to be “folding” from the center of the screen, which could be solved, at least in part, in 2022 on the new Galaxy Z Fold4.

The latest information on the Galaxy Z Fold4, Samsung’s next foldable screen flagship, suggests that we should see a less obvious crease on the new foldable screen. Ice Universe, a well-known leaker, especially in relation to Samsung’s launches, says that it saw Fold4 and that the screen of this model is significantly “flatter” than the one on Fold3 last year.

Most likely, Samsung is adopting a new design for the device hinge, which allows a longer folding radius, as we have seen on other foldable devices in recent years.

The crease of Galaxy Z Fold4 looks slightly better than Fold3, but you can still see the crease. The screen looks smoother.

For example, the Motorola RAZR had a screen with almost no marks, at least when you used it regularly, without looking specifically at the areas where the screen folds. Also, Oppo Find N, the foldable phone with a design similar to the Fold series from Samsung, offers an almost perfectly flat screen, without any traces of folding and even without that area feeling different.

Read:  Microsoft Your Phone becomes Phone Link, but only on Android

Galaxy Fold 1, 2 and 3 all came with a very obvious crease in the center, even if, over time, the screen has evolved from a 60 Hz panel to a 120 Hz and finally one with stylus compatibility and a front camera integrated in the screen. Removing the fold would be the next logical step for this series of phones, especially now that Samsung seems to be planning production in several copies of the new series, pushing more foldable devices to the “mainstream”.