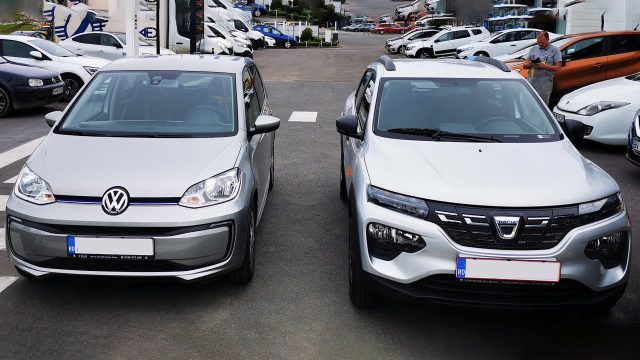 It’s easy to fall in love with electric cars, especially if you look at them as the Dacia Spring, an affordable, energy-efficient, city car designed to make it easy to travel long distances. From this point of view, Volkswagen e-up! it was the perfect alternative for the creation from Mioveni.

Volkswagen has had an impressive portfolio of electric cars for several years now. ID-3 and ID-4 are just two impressive cars with top specifications. Before them, on the entry-level area, the same segment that Dacia Spring addresses, however, was Volkswagen e-up !. A small, four-seater city electric car for a long time e-up! was no longer available for order in the Bavarian manufacturer’s portfolio. Now things have changed.

Volkswagen reverses the decision and makes you forget about Dacia Spring

If you want a cheap and good electric car for a long time, you could go to Volkswagen e-up !. Unfortunately, because it was such a good, affordable, attractive car, the orders were so many that for the second generation of the car, the delivery time had reached 16 months. Consequently, the Bavarian manufacturer decided to remove it from its portfolio in September 2020. Given that the withdrawal from the market coincided with the first ID-3 models, many were convinced that e-up! it will no longer reach representations. They were wrong.

Meanwhile, Volkswagen has continued production in 2021 to honor all old orders. Now the company is ready to take orders for the group’s cheapest electric car again. To understand how popular Volkswagen e-up is, consider that over 80,000 copies have been delivered so far, 41,500 of them over the past year. He was second in electric cars in Germany after the Tesla Model 3.

In the first phase, only the Germans will be able to order Volkswagen e-up again !, but the orders will resume in other parts of Europe in the coming months. For reference, the price for e-up! Style Plus is 26,895 euros with VAT included, but if you buy it through Rabla Plus 2022, you lose almost 10,000 euros. The car includes a 32.2 kWh battery and promises a range of 258 kilometers.