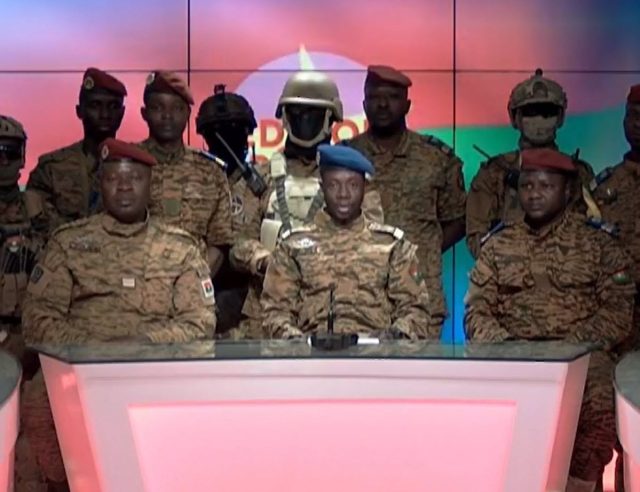 Lieutenant Colonel Paul-Henri Sandaogo Damiba, president of the Patriotic Movement for Salvation and Restoration (MPSR), responsible for the coup in Burkina Faso, held discussions this Friday with various civil society actors to “return to constitutional normality” in the country.

In this sense, Damiba has met with several general officers, as well as with the general directors of State Companies and State Public Establishments (EPE), according to Infowakat.

On the other hand, different civil society organizations, coordinated under the umbrella of a new platform called ‘Popular Initiative of Civil Society Organizations for National Unity’, have announced in a press conference a march on February 12 in support for the MPSR and against the decision of the Economic Community of West African States (ECOWAS).

“Our goal is not only to show you our solidarity along the lines you have already drawn, but also, it is a warning to tell you that we have gone too far and that there have been shortcomings. Furthermore, it is these shortcomings that allowed the Roch Kaboré regime to fall.” and (Damiba) must work so that they do not return,” said one of its members, Hervé Ouattara, as reported by the Burkina24 news portal.

For its part, the Party for Democracy and Socialism (PDP) has also supported “any policy aimed at restoring and reconquering the national territory”, although, for the time being, they have called for calm and have refrained from commenting on the future management of the new military leader.

Read:  Zelensky asks the EU for "immediate" accession through a "special process" and appreciates Europe's support

“We are very happy with any movement, any person in Burkina Faso who wants to do this work. Well, we applaud it and we support it,” said its president, Toro Drabo.

In line with the above, the Patriotic Rally Movement (MRP) has shown interest in the “roadmap” announced this week by Damiba for the “refounding of the nation.”

“In anticipation of sanctions, the MRP defends the union to achieve the possible transition,” he said in a statement, adding that they have special “concern” about the situation and that they are not going to “sacrifice” another president, as stated Burkina Faso24.

ECOWAS has decided to suspend Burkina Faso from membership this Friday after the virtual summit held between its heads of state and government to assess the coup d’état perpetrated by the Army last weekend.

The summit participants will not take any further action against the country for the time being, but have announced the dispatch of an ECOWAS civil-military mission to the Burkina Faso capital, Ouagadougou, to study the situation on the ground.

Likewise, the ECOWAS Heads of State and Government have agreed to a new meeting in the Ghanaian capital, Accra, where they will discuss the evolution of events, according to local media reports.

The ECOWAS leader, the president of Ghana, Nana Akufo-Addo, has defended the need for the situation in Burkina Faso to be resolved peacefully. Similarly, he has defended democracy after the coup, the third in the region since last year, and has called for a “firm stance” against the overthrow of democratically elected governments, reported Joy News.

Read:  An adviser to Boris Johnson resigns after disagreeing with the defamation of Starmer

“The resurgence of coups in our region is a direct violation of democratic principles,” said the Ghanaian president, who stressed that “they represent a threat to peace, security and stability” in the area.

On the other hand, he has asked not to “renounce” the “collective work and obligations” of the leaders of the region to ensure a “peaceful, fair and stable democracy” and “a prosperous community.”

“I ask you to critically examine this rising phenomenon in our region so that we can make the necessary decisions that meet the aspirations and expectations of citizens. The rest of the world is watching us so that we are firm on this matter,” concluded Akufo-Addo.

The coup d’état came after a military mutiny on Sunday in protest at insecurity and the lack of means to deal with jihadism, which is why the soldiers demanded the resignation of Kaboré and other high-ranking members of the security forces.

The mutiny took place about two weeks after the authorities announced the arrest of eight soldiers, including a commander, in connection with an alleged plot to “destabilize” the country’s institutions. They also suspended access to Facebook last week for unspecified security reasons.

The African country has generally experienced a significant increase in attacks since 2015. These, the work of both the Al Qaeda affiliate and the Islamic State affiliate in the region, have also contributed to increasing inter-community violence and have made that self-defense groups flourish.