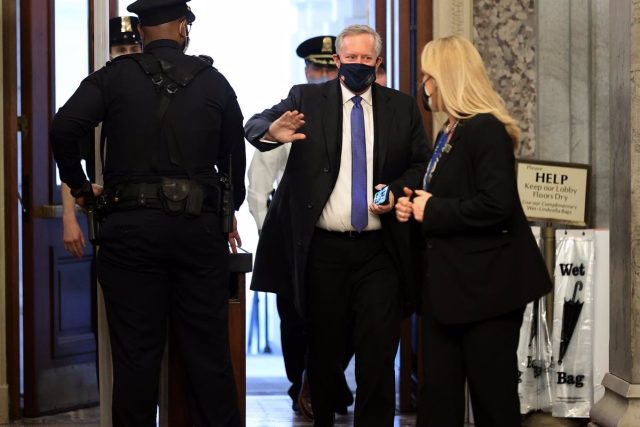 The US network CNN has obtained the 2,319 text messages from Meadows that the former Trump chief of staff provided to the House committee investigating the January 6, 2021 attack on Capitol Hill.

While the records show Meadows communicating with several Fox personalities, as well as several journalists from other organizations, there are at least 82 messages with the host in which the two discuss Trump’s strategy on the elections, as well as the possibility that the former president leaves office or the option of working together.

“I am sincere about who I am, I am a registered conservative. Yes, I voted for Donald Trump, I make no apologies. I give my opinion bluntly,” says Hannity in one of the messages obtained by the US network, which has also revealed another text in which the presenter assures that “there is no way that Biden has obtained these numbers” in the elections.

The committee commission already asked Hannity in January to cooperate voluntarily with its investigation due to these messages, which indicate that he had “prior knowledge about the planning of President Trump and his legal team for January 6.”

He further revealed that Hannity spoke directly with Trump on January 5 about “his planning” for this day, and also on January 10, when “he may have raised a number of specific concerns about his possible actions in the days leading up to the takeover.” of possession.”

Hannity wasn’t the only Fox News anchor who urged Meadows to get Trump to take action. According to commission documents, host Laura Ingraham sent this message to the tycoon’s former chief of staff: “Mark, the president needs to tell the people on Capitol Hill to go home. This is hurting all of us. It’s destroying his legacy.” “.

Trump supporters stormed the Capitol as Congress held a joint session to ratify Biden’s victory in the presidential election, held on November 3. The former president repeatedly rejected the electoral result, stating that a “fraud” had taken place, although without providing evidence in this regard.